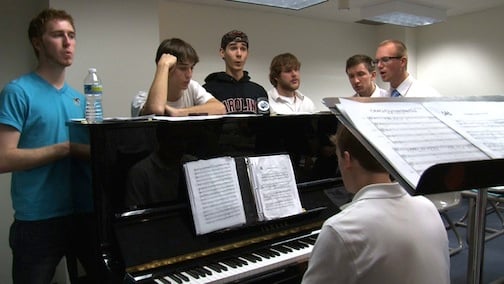 USC A Cappella Groups Hitting a High Note With Fans 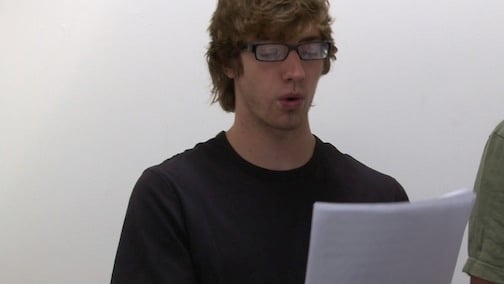 A cappella singing groups are growing in popularity and gaining new fans across the University of South Carolina campus. These groups say the Internet and television are responsible for the majority of this recognition.

The Italian word "a cappella" means "without instrumental accompaniment." This style of music was a staple in the early European Christian tradition and has been practiced since before the 9th century.

Today, thousands of colligate a cappella groups around the world perform every genre of music using only their voices.

Nadia Shukufski is the president of The Cocktails, USC's female a cappella. She says social media has played a big role in their new found notoriety at USC.

"Sites like Facebook and YouTube have allowed us to really put our names out there," Shukufski said. "It's great for sending out reminders about concerts. We're really growing."

"We've had people sitting on the floor and in the isles to see the concert," The Cocktails Music Director Laura Simpson said.

"You put yourself on the Internet and all of a sudden you're accessible to millions and millions around the world," USC Junior Cockappella member Zack Barr said. "It's a great way to further the progress of the genre."

Collegiate a cappella came to the University in 2005 with the formation of The Cocktails. USC's all- male group, Soundcheck, started a few years after.

Television shows, like Fox's "Glee" and NBC's "The Sing-off", shine a spotlight on singing and a cappella music with over eight million viewers per show each week.

Nadia Shukufski believes the shows' popularity is rubbing off on USC's a cappella groups.

"People are seeing this stuff on T.V. and they're liking it." Shukufski said. "And they think ‘Oh, I can go see that at my own school and I might as well check it out.' And you know, once they come they always do have a good time.

"You know I watch 'Glee' every week, so watching it was kind of like seeing it in real life," USC Senior Jen Martin said.

Over 300 students came to a Valentine's Day concert that showcased performances by all of the university's a cappella groups.

"I mean this type of music has always been more popular at other collages, especially in the Northeast," Soundcheck member Rico Mcclanahan said. "We're finally starting to really grow at South Carolina."

The Cocktails won the 2011 International Championship of Collegiate A Cappella Quarterfinals, held at Clemson University.

Nadia Shukufski hopes recent successes will continue to spread a cappella at the University of South Carolina and bring in even more crowds.

"I think it'll keep growing," said Shukufski. "I'm excited that more people want to get out there and get involved. We'll see what USC can offer the a cappella world."

Soundcheck's annual spring concert is on April 17, and The Cocktails are performing on April 22.