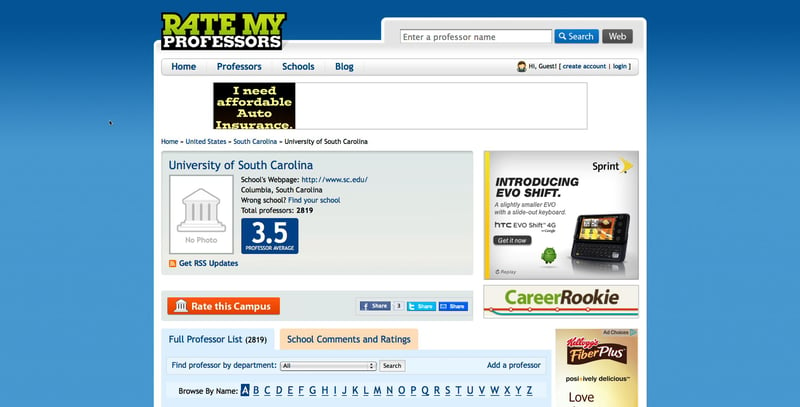 Professors are rated in four categories to make up an overall score.

It's registration time for students at the University of South Carolina, which means the stress of picking classes has returned.   There is, however, one tool many students routinely use to make their decisions a little easier.

The web site uses anonymous student comments and ratings in five categories to try to give students an idea of how classes are taught.

Some students have even come to rely on it every semester to help pick my classes.

"I'd say 90 percent of the time I rely on it," says USC Sophomore Diana Fertitta.

Katie Molchan is a junior insurance and business risk management major that says she even uses it to help maintain her scholarships.   She came to South Carolina since her major isn't offered in her home state of Virginia, and keeping her grades up is vital.

"It tells me which professors are going to put in the time and effort to make the material to understand if it is extremely difficult," Katie says.

Katie does understand that the comments are posted anonymously so anything can be said.   She says she recognizes you can't just take one comment at face value, and it's the sum of all the comments that makes it useful.

This web site is popular among students, but do professors look at it?

"I know professors look at it and those that say they don't are probably kidding you," visiting professor Sid Bedingfield says, "they look at it with a skeptical eye, they understand that those comments are anonymous and they have to be weighed as anonymous comments."

Bedingfield does believe there can be some valuable feedback in the comments posted on the site, and it's just a matter of sifting through it.  He says he believes there's a group of people that may not go out of their way to post their opinions.

"The students that were in the middle that don't hold extreme views either positive or negative," he says.

Students posting views drive the site, so the comments usually have either a positive or negative tone.

Rate my professor is not just a forum for students to bash professors. You might be surprised to learn the site claims over 65 percent of comments posted are positive.

Rate my professor has also teamed up with mtvU to create a community called "Professors Strike Back" where professors can post video submissions to address their negative ratings.

Bedingfield doesn't believe the site will ever take the place of course evaluations.

"I think the university would want to control the instrument so I don't see an independent web site like rate my professor replacing a school sanctioned student evaluation," he says.

Katie disagrees. She says she's seen how big an impact rate my professor has had on her college career.

"It's had a very big effect, I think I might have made a lot poorer decisions had I not used rate my professor," she said.