Protesters want Moore back on USC board

Bentz Kirby shows off his Darla Moore pin. Kirby was a guest speaker and played guitar at the rally. 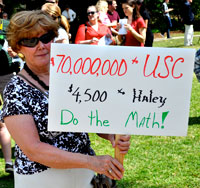 Edna Wilcenski holds up her protest sign at the rally Wednesday. She said she came to the rally “to give a thumbs down to the governor.” 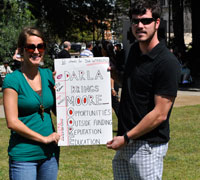 Rebecca Harrison and Justin Holleman hold up their sign supporting Darla Moore. They said they came to the rally to show support for the business school.

Over 100 people at State House Wednesday called for the reinstatement of Darla Moore, millionaire and USC's biggest benefactor, to USC's board of trustees.

Protestors spoke against Gov. Nikki Haley's decision to replace Moore with Lexington lawyer Thomas Cofield, with whom Haley says she shares similar views about how the university should be managed.

Some Haley supporters brought signs. One said: "$70,000,000 to USC; $4,500 to Haley; Do the Math!" Cofield donated $4,500 to Haley's successful campaign for governor. Another sign read: "Darla Brings Moore … Opportunities, Outside Funding, Reputation, Education."

Under the shadow of the George Washington statue on the State House steps, rally organizer Katherine Muller called on Cofield to "rise to the occasion" by relinquishing board seat to Moore.

"He would be a hero," Muller said.

Haley "is treating South Carolinians like pawns on a chess set," said Tom Brice Hall, grandson of the contributors to USC after whom Williams-Brice Stadium and USC's nursing school are named

"She's just going to do what she wants to do," Hall said. Haley doesn't "give a hoof about the next three years," he said.

Moore "should be put on a pedestal" for what she's done for education in the state, Hall said.

Moore will host a town hall meeting in USC's Russell House Ballroom at 12:15 p.m. Thursday to thank her supporters.

"I think it's like attacking a public treasure," Tom Summers of Columbia said as he sat in a lawn chair in front of the State House. "The removal of her makes no sense at all."

Haley spokesman Rob Godfrey has previously said the governor knows that her decisions won't always make everyone happy, but the she has confidence in Cofield and his vision for the state, which includes to focusing on a new higher education funding formula, accepting more in-state students, and lowering tuition for South Carolina families.

Word of the rally had spread through the Students for the Reinstatement of Miss Darla Moore and We Support Darla Moore Facebook pages.

Although close to 500 people had indicated on the page that they would attend the rally, Muller said she was happy with the smaller crowd that shrank toward the end of the two-hour protest. The few left gave a toast to a recording of USC's Alma Mater and walked back to their classes and offices with "Sandstorm," a song often played at USC football game, blaring over the speakers.

Muller said the next step would be sending three large signed cards to the governor, Cofield and Moore. She said she still hopes Cofield will resign.

"All you can do is keep the pressure up," she said.