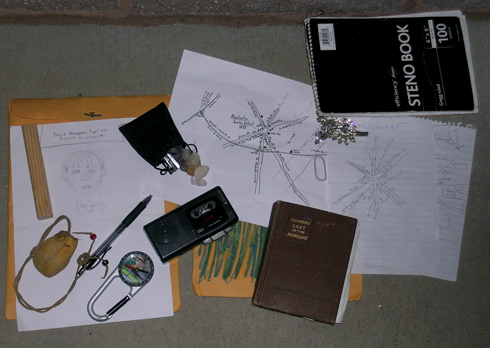 Caring for kids and conjuring spirits

Search for a psychic, and you won't find Jackie. She doesn't advertise for hire, and when asked if she's ever considered using her self-described psychic abilities for profit, she laughs. "No, nor would I ever!"

Jackie, who will not let her last name be used although she does allow herself to be photographed, grew up in Southern California and is married to a military man stationed at Shaw Air Force Base. The couple has lived in Sumter for over seven years. The 34-year-old mother of three says her ability is not new to her, but the way she uses it today is.

"I came out of the ‘paranormal closet' about two years ago," Jackie says. She joined Sumter Ghost Finders, a professional paranormal research and investigations group.

Known as "Blossum" within the paranormal community to protect her identity, Jackie says she helps direct investigations of suspected haunted sites in Sumter, Columbia and the area.

"Jackie is great to work with; her ability is a big help in our investigations," Davis says.

Jackie says people often discover her through the Ghost Finders group and use her alias to find her on Facebook. Sometimes people send her pictures or questions.

"I love being able to help people," she says.

She says she wants to help police with investigations and has tried to reach out to them, but that they won't take her seriously. Her information couldn't be used as testimony to prosecute anyone, Richland County Sheriff Leon Lott says. However, the Sheriff's Department does welcome any tips or information that could help solve crime, he says.

Jackie doesn't get paid for her efforts with the Ghost Finders, but she hopes her ability will be used for the greater good.

She recently spoke with the Carolina Reporter. Parts of the interview have been edited for brevity.

When did you first know that you had these psychic abilities?

I would see spirits all over the place quite often, and it would scare my folks. They didn't know what to make of it. They didn't think I was crazy. They didn't splash holy water on me, but they didn't embrace it. They asked me to ignore the ongoings, but they were open and loving about it. They would just say, "Don't be worried. Don't be scared. Just know it's someone that's passed on, and they want to tell you something."

How is your family life? What is a normal day like for you?

The mommy, family stuff is the same as anybody else, ya know. I guess a little bit of a different thing is my kids are starting to show signs of having different gifts. My 8-year-old, I'm at a point where I think I'm going to have to sit down and talk to him. I don't want him to feel pressured. I was pressured to not believe my gifts, and I don't want him to feel pressured to believe his gifts.

My middle one is just very psychic in the sense that he could tell you that you two girls were coming to the door even before you came to the door. … He was like, "The girls are here!" And then "knock, knock, knock." Oh, this is important. My husband doesn't believe. He doesn't believe. So these things like this that keep happening are just like jaw-dropping to my husband.

What's been your best experience as a medium?

I have a lot of different people who send me pictures and questions and all kinds of stuff. … But what's fun is when they'll have something like a missing person's case that they're helping their local police work on. They'll send me pictures, and then I'll look at them and then I'll just go to bed thinking about it. That's all I do. I will not do much more than that, because I don't know what else I can do, and then I'll write back. … I would love to help the local police, but they won't have anything to do with me; I've asked.

Do you think of your ability as a gift or a burden?

It's a gift. It's definitely a gift. It's got its moments where I want it to go away. But that's all I have to say is "Go away; leave me alone. I'm not in the mood today!" And it seems to work. I only wish I could do more with it in the sense that I wish I understood it better. I wish I understood why; what am I supposed to do with it? Why me then? I'm just little ol' me. … There's obviously a rhyme and a reason; I don't know what it is, though.

What do you say to the naysayers, the nonbelievers?

I want to listen to people who have other things to say and listen to your opinions and share stories and things, but there's people who just want to be mean and angry for no other reason than to be mean and angry. But I'm not afraid to share my story. … I still get nervous and I have still have a bit of anxiety. But I'm strong enough, believe enough and know enough in my convictions that I can stand up with my head held high and say, "I know it's true." I know what I just went through and go through all the time is so real, and I have evidence to prove so.

What's your goal? Why do you do it?

My husband sits there and he looks at it and he says, "Well, you don't bring anything home from it; you don't get anything out of it." But I do. Some people, the fact that they know in the smallest of senses that I was able to connect with somebody they really wanted to hear from, who's no longer here, means the world to them. … Some things aren't positive or wonderful. … But maybe somewhere down the road it will really, truly resolve something or help somebody or be the preventative measure to something. That's what I hope. I figure when I have something to share that's important, I will. Until then, I'll do the ghost hunting side of it.