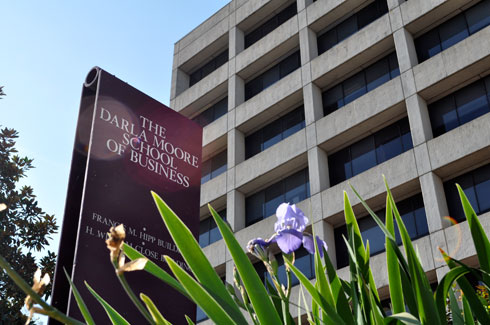 As students and alumni prepare to rally Wednesday for the reinstatement of Darla Moore to USC's board of trustees, they wonder why school and public officials haven't commented about Gov. Nikki Haley's controversial decision to remove her.

The rally, scheduled for noon at the State House, is being organized by current and former USC students, both in and out of the business school, who are upset its largest donor has been replaced with Lexington County attorney Thomas Cofield, who contributed $4,500 to Haley's campaign.

Economics senior Martha Susan Morris started the Facebook page "Students for the Reinstatement of Miss Darla Moore," which has about 2,500 "likes." She created the page to give students an outlet to vent about Moore's removal, but she wants more than just students to make a firm statement.

"I just wish someone with authority would say something," Morris said. "I understand it's kind of awkward, but the fact that President [Harris] Pastides hasn't said, 'I'm proud of you for sticking up for something, even if it's not something I believe in.' is incredibly disappointing. What Haley did shows a lack of understanding of her state. Everyone is dancing around the subject."

There has been much praise by university officials and Haley's office about Moore's contributions to the state and school, but few have commented on the Republican governor's actions outright.

"I understand that it's a sensitive issue and the university has to keep its relationship with the governor," said Carol Fowler, S.C. Democratic Party chairwoman. "But there has been an enormous amount of public outcry from the legislative officials and members of the public."

The Carolina Reporter contacted several officials for comment on the rally and received few answers.

"We don't get into the business of commenting on gubernatorial appointments on any board," said Jay W. Ragley, spokesman for state Education Superintendent Mike Zais, like Haley, a Republican.

Jim Fields, executive director of the Palmetto Institute, a nonprofit research foundation created by Moore, said he wouldn't comment on Haley's decision, and when he spoke with Moore on Monday, she would not comment on it either. Fields said rumors that Moore would attend the rally were not true but "her heart is with them."

"She won't be at a protest rally, though she is all for students protesting and participating," Fields said. "Darla Moore is committed to doing things where she invests and she gets returns. She's invested heavily in this state."

Miles Loadholt, chairman of the board of trustees, on which Moore had served since 1999, said, "I have an opinion and probably should not voice them publicly at this time."

Pastides has praised Moore for all she's done for the university and said she will be his informal adviser. Aids said he was not available for comment; his travel itinerary indicates he is in Florida.

Michelle Dodenhoff, vice president for university development and alumni relations didn't answer specific questions regarding Haley's decision but wrote in an email, "Darla Moore will always be a South Carolinian, an alumna of the University of South Carolina and the major benefactor of the business school that bears her name."

Former business student Tom Dettmer said he wanted to know what Haley had to say. "What was she thinking?" he said.

"Governor Haley has always said that leadership isn't about making everyone happy. Rather, leadership is about making tough decisions that in the long-term will transform our state," the statement said. It called Cofield "a well-respected attorney, businessman, husband and father who understands and shares the governor's vision – to focus on our new higher education funding formula, to accept more in-state students, and to lower tuition for South Carolina families."

School has not questioned Haley's decision and would like to hear her issue another public statement. Like many others, McGee said he wondered: "Why did she replace such a prominent donor and ambassador to the state and university for a 'new set of eyes?'"

Dean of the business school Hildy Teegen, had nothing to add to previous statements on Haley's removal of Moore from the board.

Phone calls made to Cofield's office were not returned.