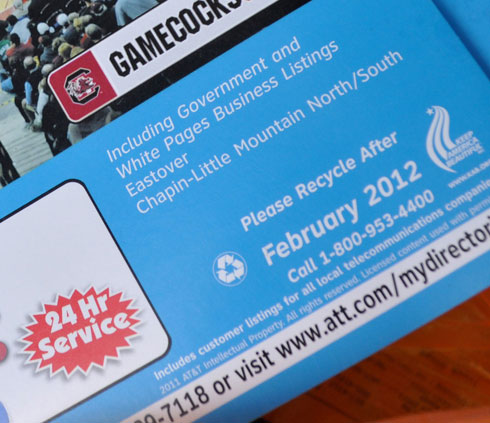 Thousands of phone books distributed to residential homes and businesses across the Midlands this year are without the white pages.

With the creation of online pages like whitepages.com and texting services like ChaCha and Google SMS that relay contact information, some Columbia residents are wondering – is the phone book dead?

Looking at Riverside Estates apartments in Cayce might well make one think so. At least six of 24 apartments in the complex had untouched telephone books still outside their doors Monday morning. The books were delivered in mid-February said Timothy McDaniel, the complex's community assistant.

"We've just left them on the side of the counter," said Rodney Alston, a 24-year-old resident. "I probably wouldn't look anything up in the phone book. I didn't think anyone even used phone books. Everyone's got the Internet. Even on their phones; it's so much easier."

Carol Fischbach, 70, said she rarely uses the phone book, but if she didn't have one she would only be slightly put off.

"I probably would feel like I needed one, whether I actually do or not," she said, "but it wouldn't send me around the bend."

Fischbach, a member of the Columbia Council for Internationals, a Southern hospitality organization whose members are primarily 55 and older, said a phone book is something useful for her own, older generation. But it's not completely necessary.

"I'm an older woman, and I'm not looking for many numbers. I've been in this house for 20 years and I know where the things are that I need to know," said Fischbach, who has lived in Columbia since 1987.

Another member of the organization, Robert Carswell, 77, said he had other ways of getting phone numbers.

"It wouldn't make much of a difference if they stopped sending me a phone book. That's fine with me," he said.

If those like Fischbach and Carswell, who said they are unaccustomed to using the Internet to find contact information, still want directories, they can be ordered free from most phone book publishers with minimal shipping time.

Fischbach said she would consider ordering a free directory if cell phone numbers were listed, but cell numbers aren't a part of directory publishing, according to the Public Service Commission.

In 2009, the state Legislature let AT&T oversee its own terms and conditions, rates and costumer service instead of being regulated by the commission, said Dawn Hipp, the PSC's director of telecommunications, transportation, water and wastewater. This allowed AT&T, which publishes most Midlands phone books, to eliminate the white pages from its directories to save on paper costs and reduce environmental impact.

In an effort to reduce waste, publishers have also shrunk the size of directories by 29 percent since 2006, according to the Yellow Pages Association.

For those who don't want unused phone books lying around, Keep the Midlands Beautiful is running its annual telephone book recycling program until Thursday, March 31.

Telephone books have special paper that won't get recycled if they are placed in curbside bins, and they should be taken to a recycling center, said Heidi Johnson, executive director of Keep the Midlands Beautiful.