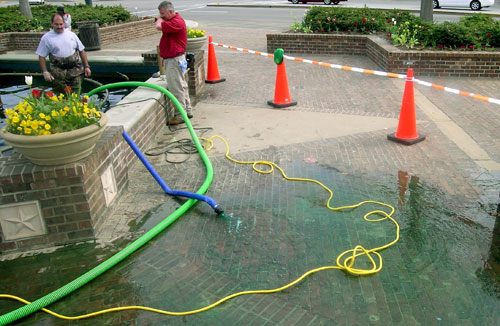 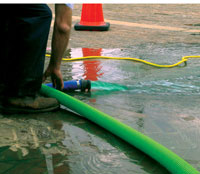 Mike Spradin, a Pascon supervisor, picks up a hose spouting green water from the Five Points fountain. W.P. Law, the company in charge of Five Points’ fountains, works with Pascon to drain the old stagnant water.

Five Points Fountain gives up its green after St. Pat's

The stages from Saturday's St. Pat's in Five Points are dismantled. The hot food stands are gone. Green knick-knacks and shamrock-shaped toys sit at the bottom of the trash-filled, green-dyed Five Points fountain.

So who has to clean out all this festive debris?

Wearing camouflage overalls, worker's boots and plastic gloves, Kevin Barefoot certainly would not have been mistaken for a magical leprechaun as he sloshed about Monday in the ankle-deep murky water, pulling out trash and green toys.

It usually takes four hours to clean out the fountain, but it was going to take longer this year because something was clogging it and needed to be pumped out.

"There's something hard in there," Barefoot said. "When it hit the pipe, it made it jump."

During St. Pat's in Five Points, "everyone throws beer cans, hats, wrappers, beer bottles in there, and the water's green, so it's harder to see," Glenn Clonts, manager at W.P. Law, the company has do the work.

Getting solids out of the fountain is easy, Clonts says, but getting liquids out, like the food coloring that children use to make it green, takes longer.

"Fountains are the most interesting thing we do," Clonts said.

The tradition of giving children and their families food coloring to pour into the fountain began about 10 years ago. It started off as the unofficial start of the Five Points St. Pat's season. Now, it has become the official kickoff to the Five Points' St. Patrick's Day celebrations that attracts tens of thousands of revelers.

"It's clean, it's safe, it's a fun way to decorate the neighborhood," Merritt McHaffie, Five Points Association Executive Director said.

The fountain stays green because the water filtration is cut off during the festivities.

The fountain is also dyed for other events, like orange for Halloween.

McHaffie said the association has considering putting LED lights in the fountain, but she assures little lads and lasses they will still get to enjoy turning the fountain green.