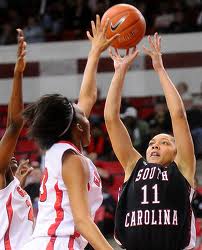 The Lady Gamecocks finished their 2010-11 season with a second-round WNIT 69-57 loss to the Charlotte 49ers at the Colonial Life Arena Sunday. The Gamecock's had a difficult day shooting the ball, which put even more pressure on the defense.

"I thought our team played great for 40 minutes," Staley said.  "They never gave up, and they never had the look of defeat. They were always moving and into the game. Our offense just failed us today. We didn't hit enough shots, and we could not keep up with them in transition."

Ieasia Walker led the Gamecocks with 15 points and Markeshia Grant, who played from behind for the majority of the day.

Coach Staley says she is very proud of her team.

"With all the things that happened to our program in the past three years, I thought our team played incredible [this season]. I thought they fought through a lot and let the process work. If you believe in the vision and everyone buys into it, you will find a way to be successful. That is what happened to our basketball team this year," Staley said.

The Gamecocks finished the year with an 18-15 record, their best record since the 2006-07 season.