It's Time for Carolina Football! - DatelineCarolina 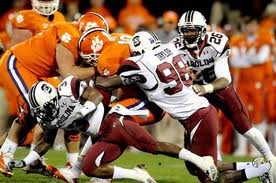 It's Time for Carolina Football! Spring Practice Kicks Off 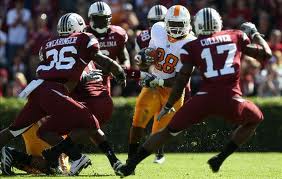 USC begins preparations for the 2011 season

The 2011 edition of South Carolina's football team kicked off spring practice this week with high expectations after winning the SEC Eastern Division a season ago. Winning the east was only the second major championship in school history and is a great accomplishment for the program. But some players are not satisfied.

Senior defensive back Akeem Auguste wants his actions on the field to lead the team.

A new face to the program is junior college transfer Kelcy Quarles, who is trying to use the spring to catch the attention of his coaches.

In just the first week of practice Quarles has managed to draw a little praise from defensive line coach Brad Lawing.

Quarles wants catch up. The USC defensive lines strength, size, and speed are expected to be one of the keys to the team's success.

The Gamecocks will conclude spring practice with Garnet and Black spring game on April 9.