Student guitarist gives up outdoor support to get degree - DatelineCarolina 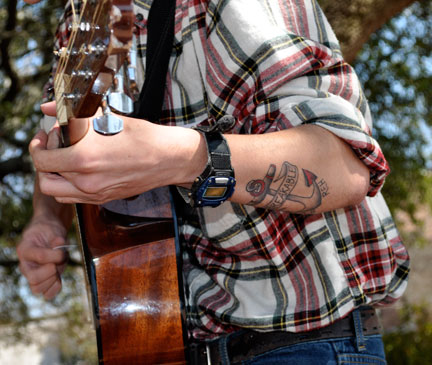 Student guitarist gives up outdoor support to get degree

At first, Austen Hall's story sounds as familiar as the chord changes in his cover of "Wonderwall": He's a college student who loves to play guitar and plans to study music composition at USC while living on student loans and financial aid.

But with his strumming and stamping in front of the Thomas Cooper Library fountain, Hall aims for a better life that lets him use his musical passion for full-time financial support.

Hall, 19, says he grew up in Greenville "in a family that made $600 total last year." Last summer he started playing his guitar in Greenville's Falls Park for fun.

Hall said he managed to earn about $250 a week during the summer and "that helped, but we couldn't live on that." He worked at a restaurant last winter, but said he wants to use his music to pay his bills full time.

So he left his parents and brother and a spot on Emerson College's wait list and came to USC for a degree in music composition. He said it was a hard decision but his family encouraged him to follow his dream.

Reginald Bain, coordinator of composition and theory at USC's School of Music, said it's a specialized degree that students use to earn more advanced degrees for teaching or to get into the technical aspects of the music industry.

"For someone who wants to learn songwriting, this kind of over-prepares them," Bain said.

But Hall said he wants to learn all he can about writing music. And every sunny Monday, Wednesday and Friday when the temperature is 65 or higher, Hall takes his acoustic guitar to the brick steps in front of the library and plays to whoever walks by after his classes end at noon.

Columbia city ordinances don't allow him to collect donations, but Hall says he loves the attention and practice. With scholarships and money saved from his restaurant job, Hall has been able to live at Capstone House and devote his time to music and classes – for now.

The Carolina Reporter talked to him about how he plans on combining his academic and musical aspirations.

How tough was the decision to go to college instead of entering the work force?

I entered the work force during my semester off. I was working at a fine-dining restaurant as a server and stuff and doing things like that. It was cool, I liked having the money, but it was like I wasn't quite ready for it. The education is probably a better route.

So what's your financial situation like right now in college?

At college I'm OK. I've got my meal plan, I've got all my financial aid through – I actually got a really nice overage with scholarships and stuff and so I was able to get a new computer, I was able to, you know, have a little bit of spending money, which was nice. I had money left over from work at the start of the semester and I'm just trying to make it last for now, which is bad because I'm smoking a pack a day and wasting it on a lot of things, but it's nice for the time being and I need to get a job soon, even if it's just part-time. So I'm OK right now.

You busked a little bit in Greenville?

Can you tell me about that? …

I was kind of quiet, didn't have a lot of confidence in it because I'd never done it seriously. I hadn't performed out in front of people. … All of a sudden people started dropping ones, fives, asking for songs. … Greenville requires you, I found out, to have a permit to busk … and I've talked my way out of so many tickets and hid my money because I saw a cop. For a while I just didn't want to do it on principle. I was like you know what? It's more practical otherwise, and I found out that you tend to make more money with a bucket. … It provided for the time being, for a while. It was a lot of fun. People started to say they liked it and that I had some potential so I was like you know what? I'm going to do this. …

We're in the middle of a recession, and you decided to study music composition.

I mean, because I like nice things, I do, and I can appreciate them and I like having them, but at the end of the day, it doesn't take a lot to make me happy. … I'm more than happy to work, I like, in the restaurant industry I can work as a cook or a waiter to make ends meet. I'm OK with that as long as I'm able to pursue things like people and music and stuff. … I play a lot by ear, because that's sort of the style of music I play. …

Do you think this will translate well to the music school program?

I think so. I don't know. I feel like I tend to get along with people. I can be stubborn, and when I really put my head into something I work for it, and I'm really putting my head into this. It's like you know I've got one life that I know of to do this, and so I want to, you know, give it my all and if I fail it at least I can say I tried. And so I want to go into the music program and be able to have that as a basis to contribute, and if it doesn't work, I'll still pursue music, obviously, but it's a matter of I'd like to have that composition ability. I feel like it would make my songwriting more solid … I want to have the ability to do that.