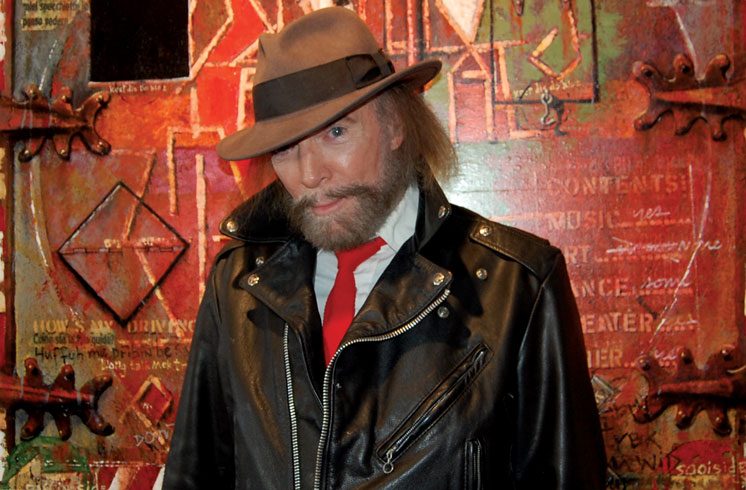 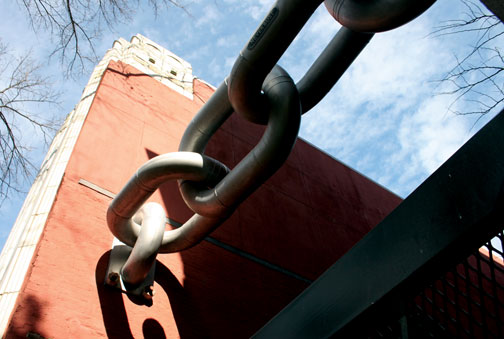 "A chain is a beautiful thing," Sky says of "Neverbust," a 25-foot welded steel chain that links on Main Street. "It's the concept of power; something that's big and strong and powerful. And I think that's a beautiful concept." 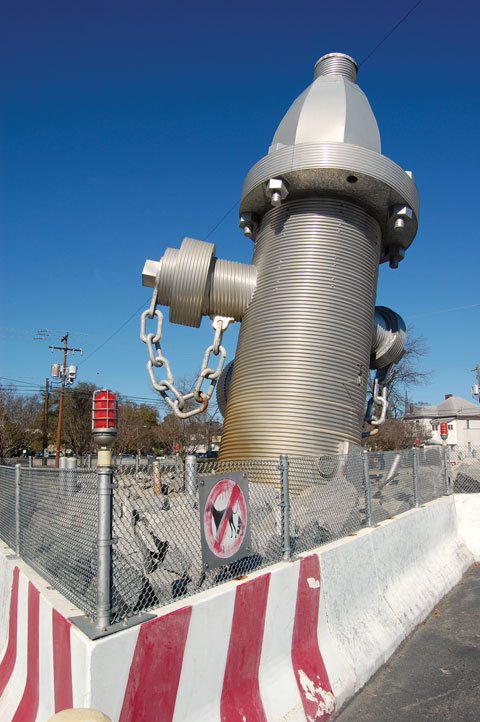 Sky was commissioned to create "Busted Plug Plaza" by the AgFirst Farm Credit Bank in honor of its 75th anniversary. The 675,000 pound fire hydrant was built to withstand a direct hit from a tornado.

Blue Sky, one of South Carolina's most recognizable artists, believes in karma.

"The world is like a big bank account," he says. "Now some people give to society, they're in the black. They've got assets. People who take from society – they're in the red."

The 72-year-old Sky legally changed his name from Warren Edward Johnson in 1974 – he says he was so impressed by the blue sky that peeked through a hole in the clouds after three weeks of rain. Almost 40 years later, he has a lot to say about the Columbia art scene, how there are too many artists and how difficult it is to make a living – and about karma.

"So what you've got to do, you've got to get a big bank account in your name. And that's what I try to do," he says. "I try to do so much free work, these murals, that I keep my account so I can make withdrawals on it, you know?"

Sky's works have been found around South Carolina since the 1960s. Among his most recognizable are three in downtown Columbia – the "Tunnelvision" mural and 40-foot fire hydrant, "Busted Plug Plaza," at the AgFirst Farm Credit Bank and, a few blocks away, "Neverbust," a 25-foot welded steel chain that hangs over an alley and links two Main Street buildings.

Sky compares himself to public entities like South Carolina Educational Television that periodically ask for donations.

"I've got a whole bunch of public works out there, and they've been enjoying these public works for years. How about supporting me?" he says.

Donning a leather jacket and bright red tie, Sky sat down in his gallery to talk with the Carolina Reporter.

You've exhibited in Chicago and New York and Washington and all over the U.S., so what's kept you in Columbia?

Well, my family's been here for a long, long time – I mean generations. And Lynn's family has too. And this is home, you know?

We've traveled, and there are a lot of amazing places that you can go see, but you know, to quote Ralph Waldo Emerson – you ever read any Emerson? He said, "Travel is a fool's paradise."

What he meant was, people go travel to see wonders and to see things they haven't seen. That's fine but the true, wonderful thing in life is to see things around you in a new light. That's the most important thing. That's what a true education is – the ability to perceive things about things you see all the time in a whole new way. You know, that's what education is.

Travel is just, you know, like handing toys to a baby, you know. I have spoken.

As someone who's been an artist in Columbia for a while, do you believe the city is moving in the right direction?

The talk about artist movements, there's already an artist movement in Columbia. Columbia's a very active city when it comes to art. All the ballet companies, all the writers, play, drama groups, you know? …

But I tell you right now, there's only so much pie, you know? Money. Columbia's not a rich city. It's a relatively poor city, you know, when you compare it with some of the other cities. …

But I like that about Columbia. I like the way it doesn't change, you know? In fact, if I could push a button right now that would make everything stay exactly the same for the rest of my life, I would do it. I would say "OK, don't tear down anything, everybody stay."

I would be perfectly happy with that. But there are other people who think that by having economic progress they're going to be a whole lot happier. Well, that's not true. It's like Ernest Hemingway said, "the invention of the airplane and the fact that the airplane is faster than the horse, are we any better off for that?" …

So, prefacing my answer with this, there's no need for the artistic community in Columbia to grow. I mean, in fact, if you ask me I'd say, don't even teach kids art. Why would you teach kids art?

It used to be a person took up art because they had talent, you know, inclination. There's no need to educate everybody about art. You know, in fact, and on top of that, here I am, I'm trying to earn a living in Columbia as an artist and we've got only so much pie remember? A little pie.

You can't slice that pie up into so many slices that nobody'll have anything. If you've got thousands of artists in Columbia, which we're getting by the way, the pie gets thinner and thinner – the slices get thinner and thinner so we can barely operate this gallery now because there's so many artists out there. See the person who goes out to buy art, they don't know who's any good or who's any bad, they're overwhelmed with artists, everybody's an artist.

There are too many artists in Columbia. I say fewer artists. …

Art is a profession. I'm a professional artist. I've been to school, I've studied in New York, Mexico City, Columbia – I'm a professional. Don't go gumming up the works having all these amateur people coming in, claiming to be artists and look what's happened – nobody's making any money. Nobody can support themselves anymore. Not even I can support myself. And as Forrest Gump said, "That's all I've got to say about that." …

Unlike "Busted Plug Plaza" which you had to have approved by design committees, when you did "Neverbust," you did that one secretly.

Secretly, out in the country, built it out in the country. I'd already gotten approval from Sylvan's and whoever owned the Kress building. They wouldn't put up any money for the project, but they said I could do it.

So in the middle of the night, we came in with the trucks, a crane and everything. We came in and right in the dark with the spotlights and everything, we put it up there, and we were gone by morning and it was up there. People came to work on Monday morning, and there it was.

What do you feel you've given to Columbia and to the world through your art?

First, there's one thing about all my public works. And that is, if anybody looks at it and thinks it's art then I've failed because it's not meant to look like art. I want it to look like something bizarre and something they've never seen before. And the last thing I want them to think is that it's art. And consequently, because it does not look like art, it's really hard to talk to anybody about; raise any money for it.

The reason I don't want it to look like art is because the purpose of my work is to jolt the senses. Jolt you into believing something that's not true.

Get up close and personal with one of Sky's most recognizable public pieces.