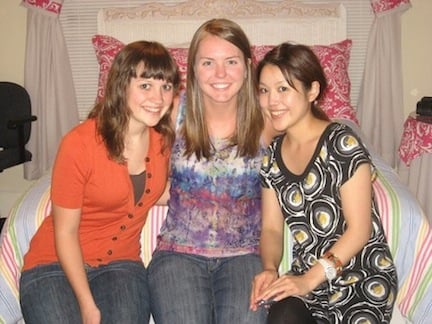 USC student Makenzie Wilson feared a friend of hers was among the 6,700 missing people, or worse, one of the more than 3,700 people dead after an earthquake and tsunami rocked Japan last Friday.

Makenzie met Satsuki Ogawa in high school a few years ago when she came to South Carolina as a foreign exchange student.

"We ran cross-country together, we ran track together, so we became very close," Makenzie remembers.

They became close enough even years after Satsuki returned to her home in Japan, she still made time to visit Makenzie and her American friends. Makenzie told Carolina News she just saw Satsuki this past September.

But September seemed like an eternity ago for Makenzie, who feared the earthquake and tsunami washed over more than a country; she feared it washed away her friend.

"I got more and more concerned when I started seeing the death tolls climb," Makenzie said.

Thankfully for Makenzie, Satsuki was not among the dead or missing.

"Finally, she posted on Facebook," Makenzie said. "She replied to a wall post that she was okay, that her family and her friends were safe, but that's all she said."

That's all Makenzie knows, and what she doesn't know causes her to worry about Satsuki's well-being.

"I'm worried about her house and things like that," Makenzie said. "I have no idea what kind of shape they're in."

It's hard for Makenzie to find out what's going on because she hasn't contacted Satsuki directly.

"Melissa [a mutual friend] has been the only one that made contact with her, so I told her last night to please let me know if she needs anything," Makenzie explained. "I'll be glad to send anything she needs over there."

All Makenzie can do is keep updated on the situation in Japan and wait until she can talk to Satsuki directly.

"[Melissa] is setting up a Skype date with her, so when that happen's I'll try to Skype with her as well," Makenzie says.