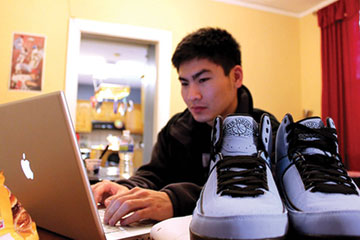 Student paves own way in business world with sneaker website 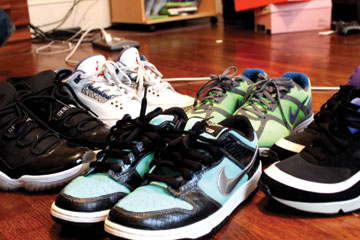 Han estimates that he sells around $250,000 worth of shoes each year. He goes home about two weekends a month to take care of his inventory, and his stays can range from a few hours to a few days. 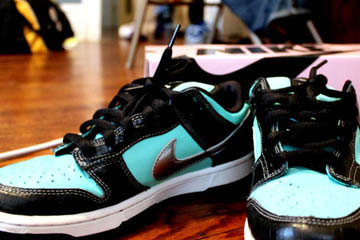 Han has been selling collectible and high end Nike sneakers since he was in seventh grade. The fourth-year international business student at USC says his success as an entrepreneur comes from being outgoing and courteous.

When you walk into Truth Han's house, the modest bungalow off Rosewood Drive is not much different from any other house where college guys live – clothes are on the floor, mismatched furniture is in the living room and shoes are strewn about.

Lots and lots of shoes.

Han, 21, owns jumpmansneakers.com, a website that sells high-end and rare sneakers. The Charlotte native and fourth-year international business student started the venture in seventh grade and has kept it going throughout his time at USC, selling about $250,000 in merchandise each year.

"I always loved shoes when I was a little kid," Han said. "And my mom really wasn't – she really didn't like the idea of buying me all the shoes that I wanted, so I had to figure out a way to get the money."

So he came up with the idea of buying and reselling sneakers.

"I just looked at shoes a lot online, and I found out that maybe there was a market for people that wanted these higher-end, collectable shoes," Han said.

His mom, Xiaopei Han, thought his idea was crazy at first.

"We thought maybe he didn't know what he was doing," she said. "But he kept talking and talking about it."

"My parents have dealt with me for a long time, so they know that if I want to do something there's very little stopping me," Han said.

He went out and bought a pair of Nike shoes for $39, put them on eBay and ended up selling them for $200.

"After that, we thought probably he knew what he was doing," Xiaopei Han said.

As the business grew, Han moved from eBay to his current website, where he sells shoes he buys mostly from Charlotte-area suppliers.

It's a simple business model: buying a product and reselling at a higher price when demand goes up, and it paid off for Han. But it takes more than just a good idea and a love for sneakers to make a business like this work – it also takes entrepreneurial skills.

"You know, everything that goes through my brain is just thinking about different businesses and what I can do to succeed," Han said.

Dean H. Kress, one of Han's business professors, said it doesn't take particular personality traits to be able to recognize and explore an opportunity, but it does take commitment, perseverance and an obsession with that opportunity.

"Truth had a perception many others missed as to what he could do with this niche market," said Kress, associate director of the Faber Entrepreneurship Center at USC.

Han said he's "not afraid to say anything or ask anything."

"I'm clear and straight to the point with what I need done," he said.

According to the Kauffman Foundation, those 20 to 34 years old started a quarter of the new businesses in 2009, the last year for which the foundation has figures as part of its entrepreneurial activity index. Nationwide, 340 out of every 100,000 adults started business each month during that year, but the rate in South Carolina was 230 per 100,000, the foundation said.

The push to encourage entrepreneurship has increased as the fallout from the Great Recession continues to be felt. The National Association of Colleges and Employers, for instance, said that last year just a quarter of students who applied for jobs had positions lined up for after graduation. That compared with more than 50 percent of 2007 graduates.

Han's roommate Harrison Kirschbaum has known him since freshman year when they lived on the same floor of Capstone House. Living with a serious businessman like Han wasn't all work and no play, and he's pretty normal, Kirschbaum said.

"Other people, like the people he does business with, see only the business side of him," Kirschbaum said. "It's kind of cool 'cause I get to see all sides."

Kirschbaum, also a USC business student, has been helping Han the past couple of years by sorting through suppliers' inventories to find sneakers Han wants and hauling merchandise to Han's home in Charlotte, where he keeps his inventory.

Han said that when he started, he quickly built relationships with his suppliers by being outgoing and confident and making a good first impression.

"You're so much different than everybody else that people remember you because – I mean – I was a 12-year-old Asian boy, and they don't come around that often whenever they're trying to buy every pair of shoes that you have," Han said.

His mom said she initially didn't have much concern about how this business would affect his school or social life because he already spent a lot of time on the computer playing games. As with most mothers, she always worried about his schoolwork, but she says she dismissed concerns by friends and family about his future.

"I said Truth likes what he is doing. It's better than him playing video games, and if he can make a living doing it, then that's good too," she said.

Han considers his business venture "more of an entry-level job."

"Just to teach me the basics, go through – you know – life lessons, morals through business practices," he said. "I think it definitely helped me as a person."

When it comes to the future, Han has a solid grasp on what he thinks he needs to be successful in business, but not necessarily as an entrepreneur.

Working for someone else and doing something new appeal to him. It's important to see what other things are like on the other end of the spectrum, Han said.

"I definitely don't want to see myself doing this in five years," he said. "I think that I'm capable of doing bigger and better things."