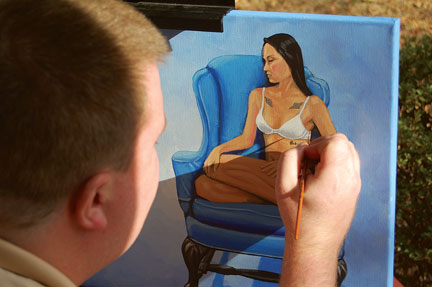 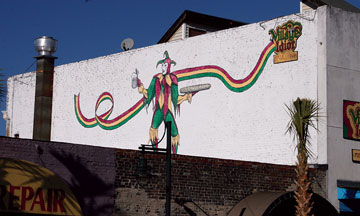 McClellan Douglas' mural of a jester on The Village Idiot pub, which he painted in 2004, looks down toward Saluda Street in Five Points. 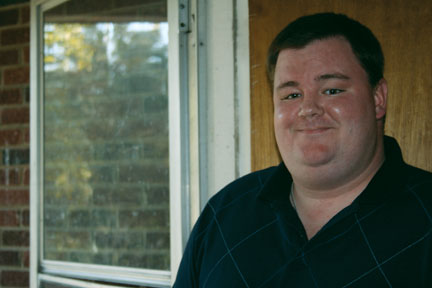 With the front door open and music playing, Douglas uses his home as a studio where he paints. Douglas, who is a Columbia native, is a self-taught artist, photographer, writer and cook.

As he sits back in his worn and faded wing chair, self-taught artist McClellan Douglas looks around his sunlit living room and takes inventory of his work. His portraits and other work, including a large mural of a jester that adorns the side of The Village Idiot bar in Five Points, can be seen throughout Columbia.

Douglas, 31, has had his share of adversity. But those who know him use words like "jokester" and "jester" to describe a man whose buoyancy and humor help his community, whether it's mentoring others, widening the city's artistic landscape, creating a holiday gingerbread house for the Governor's Mansion or, as one friend says, making the best spinach artichoke dip he's ever tasted.

Through experimentation and practice, Douglas, whose exposure is mostly word-of-mouth, has become proficient in media that include faux-finishing, trompe l'oeil and hand painted signs. And then there's his cooking. But he especially enjoys painting portraits.

"I get huge satisfaction from capturing expressions from people," he says.

Mary Beth Gillis, a family friend, says she owns six of Douglas' paintings, mostly portraits of her nieces and nephews. Gillis says she fell in love with Douglas' work and its informality when she saw his "Spilt Milk" painting on Facebook. For instance, she says, instead of painting her nephew posed and clean, Douglas included details like sand on his face at the beach to capture the natural human aspect of the setting.

It was a recurring nightmare that helped Douglas realize his talent. He says that when he was 8 or 9, he would dream about looking over the side of a boat in the middle of a lake and seeing a decrepit woman beneath the water who would violently take hold of his arm and drag him back down with her.

Ford says that when her son was 7 or 8, he used his own money to buy a drawing book. He used it for years to practice his techniques until the book was in tatters.

Douglas says his work doesn't fit into one style. For instance, you can find his signs hanging outside businesses like Carolina Furniture & Mattress and SmartPhone Medic, while his murals hang in popular bars like Pour House.

Sometimes, he says, he'll walk into an art supply store, look around and decide to try something new. Currently, Douglas is experimenting with papier-mache to make masks.

His mother says her son's need to draw is like an obsession. "He's doing what he has to do," she says. "He can't stop."

Douglas describes himself as having the "attention span of a monkey" and lacking enthusiasm for school. In place of doing assignments and taking notes, Douglas says he spent his class time at Dreher High School immersed in his drawings. He dropped out, but says he now has his GED certificate.

However, "I knew if he wanted it, he could do it," says Vandiver, who recently bought one of his former student's paintings. "He looked at things the way an artist does. He didn't just look at something – he saw it; he felt it."

Vandiver says Douglas often helped fellow students with suggestions and insight on how to enhance their work. Douglas' father, Mac Douglas, says his son never had a hint of selfishness.

"He enjoys doing things for other people," his father says.

Douglas builds morale through his sense of humor. Rod Skinner, the owner of Cock n' Bull Pub-Grille where Douglas worked as a cook, described him as the "big daddy" of employees. Skinner says that whenever things got stressful, Douglas would alleviate the tension by making jokes.

Whether any of those jokes grew out of Douglas' troubled childhood, we may never know. While he and his family say he had a rocky time, they won't discuss specifics.

Douglas' younger brother, Alderman, says that at a young age he would try to emulate his brother's drawings. McClellan, Alderman says, would create templates for him to replicate and improve his skills.

"I'm constantly surprised by his work," says Alderman, guitarist and lead vocalist for the local rock band Timshel. "Even if he's never done it before, he always finds a way to produce something great."

Douglas accepts such praise with both humility and a subtle confidence. It's why, say those who know him, his talent receives little recognition.

"McClellan is the most raw talented of any artist I've ever known," says Philip Hartley, a longtime friend since high school. "He's aware he produces great artwork, but to McClellan, it's not about talent. It's about working hard at it."