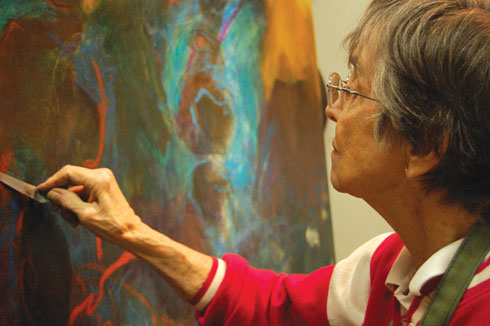 Wim Roefs, who owns the if ART gallery and organized Laura Spong’s latest show at Gallery 80808, points out a scratch in the surface of her painting “We All Live Downstream.” Spong repaired the painting, and it sold for $6,500. 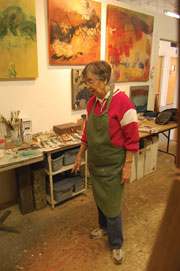 Laura Spong steps back from the easel in her studio. “I’m just doing what I like to do,” she says. “And even now, if I never sold another picture, I’d keep right on because this is what I like to do.”

Painter Laura Spong works in a genre that had its heyday after World War II, but she's just hitting her stride after 60 years in and out of the business.

Spong says Columbia has gotten much more receptive to modern art than in the 1950s, when, as a young artist, she would display her work at sidewalk art sales and overhear all the predictable responses: that people didn't "get it," that someone's 4-year-old could have done better.

During Charleston's Spoleto arts festival in May, Spong will have a show at Smith Killian Fine Art, which normally showcases traditional coastal landscapes and wildlife sculptures.

Two days before Spong's latest show, a mid-February exhibition at Columbia's Gallery 80808 that coincided with her 85th birthday, Spong was in her studio plying brush, palette knife and fingers to repair a scratched painting that would later sell for $6,500.

"And now I'm just painting on it, and I need to quit," she said, stepping back. Also in the room was Wim Roefs, owner of a Vista gallery, if ART, and the show's organizer.

This sort of ribbing peppers their conversation. Spong's career has taken off in the past five years, and she credits her partnership with Roefs – especially since 2006, when he arranged her 80th-birthday exhibition – for launching her late success.

Spong doesn't make grand claims about the meaning or importance of her work, and artists in neighboring studios have noticed her tendency to paint over work she doesn't like rather than spend money on a new canvas.

She married Ernest Spong, one of the first sailors to return from World War II on the aircraft carrier Yorktown, and moved with him to Columbia. They had six children.

At some point in the 1950s, Spong reckons, she saw an abstract expressionist painting at the Columbia Museum of Art and chose it as her style. She didn't know it was a movement, nor did she know its visionaries were shifting the art world's axis from the Old World to America.

Spong's style is nonrepresentational, not meant to call any particular object to mind. She says she picked the style because she can't draw (a claim Roefs disputes) and because she "found it boring to look at a coffee cup and try to copy it."

Beginning in 1957, she won several juried exhibitions. For the next three decades, Spong took art classes and had a few exhibitions.

But she couldn't paint full time – not yet.

She had children to raise. She held several jobs, especially after her husband died in 1973: archivist, city arts and crafts director, paint store worker, seller of children's clothing. When she didn't have time to paint, she did decoupage and macrame.

1973 was also the year doctors diagnosed Spong with breast cancer and performed a radical mastectomy. The cancer would stay in remission for more than 30 years.

Mary Bentz Gilkerson, an art professor at Columbia College and longtime friend of Spong's, says the 1991 move into the studio – after Spong's children were grown – was part of a commitment to pursue art full time.

"When you have to pay the bills, there's a real big motivation to get out there and work," Gilkerson says. In the 1990s, Spong started doing solo exhibitions around the state and region.

Gilkerson says Spong's most recent work deals with her bout with cancer, which returned in 2006, and with the death of a close friend.

"It just makes you aware of your mortality, and I think a lot of mature artists deal with big-picture issues," Gilkerson says. "If anything, there's more intensity to her work, so when it's dark it's very, very dark, and when it's bright it's more intensely bright."

Spong says she is "not as aware" of post-cancer changes in her work as is Gilkerson.

"I have a sense of urgency about my painting," Spong says. "But it has as much to do with my age as anything."

After 2006, the whirlwind of success and recognition began: an artist's residency in Kaiserslautern, Germany; her art shown in the Lifetime TV show "Drop Dead Diva"; purchases by the Greenville County Museum of Art and the South Carolina State Museum.

"In the ‘50s it was new and infamous; now it's old and famous," Collins says.

Still, Spong's style defies conventional expectations. Roefs hears the question "But what is it?" often enough to have a pat answer: "It's a painting."

"So those of us who don't know anything just keep on doing it," Spong says.

Collins says a receptionist recently asked him to explain one of Spong's paintings her company had hung behind her desk.

"The man on the street is still confused," Collins says.

Decades into her career, Spong says she sometimes gets frustrated with her own creative process.

"It's mostly just putting it on the canvas and then reacting," she says. "The first line I put up, I react to that to do another line, so it builds itself in that way. … It's frustrating, because it almost feels like you don't have any control over the creativity."

There is no model to work from, she says, and she goes into a painting without any plans. And she doesn't say much about her progress as an artist, often deferring to Roefs on the subject of her own paintings. But she knows what she likes.

"Even now, if I never sold another picture, I'd keep right on, because this is what I like to do."