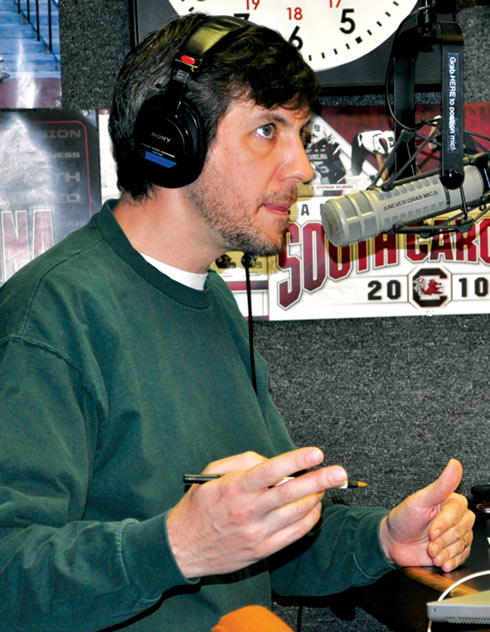 Sports talk host Jay Philips talks with a caller on “The Halftime Show” inside the Citadel Broadcasting studio in Cayce.

Jay Philips has worked for two South Carolina governors, married his college sweetheart and worked through her battles with cancer while maintaining a job in sports-talk radio.

And he did it all without a college degree because the job market called early while he was still a senior at the University of South Carolina.

"I never made a big deal of it, but there just wasn't a need to go back to college," Philips says. "All the sudden, here I am 40, father of four, married almost 15 years."

Philips spent his childhood bonding with his grandfather, whose best friend he says was former Gov. Robert McNair, or "Uncle Bob" as Philips calls him. Throw in his family's relationship with then-Sen. Ernest "Fritz" Hollings, and a future politician seemed to be in the making.

"I knew then that I wanted to be a part of this," Philips says. "I knew every senator, I knew every representative. I've known just about every governor. It's just in the blood."

So in 1992 while at USC, Philips took a job in the press office for Republican Gov. Carroll Campbell. He stayed on for about five months with the next governor, David Beasley, before a job with WIS beckoned. The local broadcasting icon had just revived its news-talk radio station, and Philips decided to apply.

"They just needed a warm body," Philips says. "I'm not bragging on myself as much, but they realized that I actually knew what I was doing."

Three weeks in, he was offered a full-time job despite still being a student. He took the job and says he did a morning show while writing newscasts for anchors like Susan Aude and David Stanton.

"The next thing I knew, I was married and had kids," Philips says. "I said, ‘You know what? I really need to finish college." But he never did. "Now here I am with my own show," he says.

That's when his world shifted from politics to sports. And it was his political knowledge that helped shape his sports radio success.

Sports-talk host and colleague Will King recalled Philips talking about the high school football championships moving to Clemson and which legislator was trying to move it and why.

"He can bring in politics when it applies to sports," King says.

Philips took a gig with former USC basketball broadcaster Mike Morgan on WISW-AM while WNKT, owned by the same company, was working out the kinks to become 107.5 FM "The Game."

When the station launched in 2007, Philips was paired alongside former Gamecock and NFL great Duce Staley. The program, called "The Halftime Show," eventually blossomed into one of Columbia's most popular talk shows. Philips says the show has helped make 107.5 one of the top five local radio stations and has quarters where it is No. 1. According to Radio Online, WNKT finished No. 12 among 23 stations last fall in Arbitron Ratings.

"He's very intelligent," says Brent Johnson, who has worked in Columbia radio for nearly two decades. "A lot of sports shows do their silly shtick and giggle at each other. Jay is very seriously minded."

It was a perfect fit for Philips, who despite political connections always had a heart for sports.

"When he was little, Jay wanted to go into some sort of sports media or broadcasting," says Sunny Philips, his wife. "He's been blessed to be able to follow that along the way."

But life inside the political sphere never completely vanished. In 2006, Philips helped clean up the image of Lt. Gov. Andre Bauer, who had made headlines for repeated speeding violations.

His wife is also one of the state's top political fundraising consultants and worked in Campbell's office the same time as Philips.

The two met – Philips calls it "serendipitously" – when they were just a week into their freshman year of college.

Philips and his roommate had decided to go bowling, and Sunny was in the next lane.

They married in 1997 and now have four daughters. In 2008, they discovered his wife had cervical cancer while she was pregnant with their fourth child.

"I just remember feeling that rush of something go out of you," he recalls. "I can remember hyperventilating almost because I was so scared."

They headed to Johns Hopkins Medical Center in Baltimore where she was treated. Their child, despite spending six weeks in the ICU because she was born early, is healthy, and Sunny is now cancer free.

"Having him there was a tremendous relief to me," she says. "I knew everything would be fine even if I wasn't around as far as the girls went."

Philips has always called Columbia home and says his family loves it, but he knows a move is possible with his wife's success. He says two 2012 presidential contenders are hoping she'll work with them but that she has yet to decide.

So for now, he's enjoying life in Columbia, just waiting for what comes next.