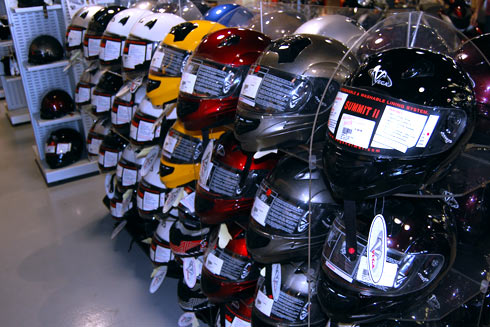 Carolina Honda offers a wide array of off-road vehicles for drivers over 12. 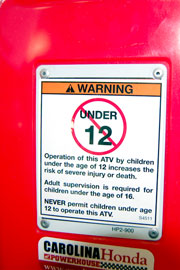 Federal law requires all ATVs to bear similar warning lables that designate what age they're suited for.

As bills that would create age restrictions and safety requirements for all-terrain vehicles again make their way through South Carolina Legislature, some senators have lowered to 6 the age at which children could drive ATVs

A similar proposal died last year when Sen. Larry Grooms, R-Berkeley, put a hold on it. Two pervious versions of the bill were vetoed by then Gov. Mark Sanford, who said the state would overstep parental rights.

The parents of 16-year-old Chandler Saylor, who died in a 2003 ATV accident at a birthday party in Swansea, have been lobbying for restrictions since Rep. Harry Ott, D-Calhoun, suggested it at their son's wake.

The proposed "Chandler's law" would require ATV riders 16 and younger to pass hands-on safety training, wear a helmet and safety goggles and be supervised by an adult. The original proposal said drivers had to be at least 9 years old, but a Senate Fish, Game and Forestry subcommittee lowered it to 6 last week.

The All-Terrain Vehicle Safety Institute, the manufacturers' group that is also responsible for the safety classes, said setting the age at 9 would dry up the market for ATVs made for children ages 6 to 10, which are easier to handle and can go only 10 mph.

Making sure that ATVs fit the riders will keep families safer, said the All-Terrain Vehicle Association, a national group of riders.

Saylor's father, Steven Saylor said he is more concerned with getting supervision, education and helmet rules established than he is with the age.

"You can't always hold their hands," he said. "If this law saves even one child's life or keeps one parent from going through this tragedy, all our talking at the State House will be worth it."

A study published in February by Dr. Keith Borg of the Medical University of South Carolina found that 63 South Carolina children died in ATV accidents between 1998 and 2007.

Borg also found 764 children had traumatic brain injuries, 121 of whom under 7. Borg, an emergency pediatric doctor, said he and colleagues have seen increases in injuries resulting from ATV crashes and that prevention is the only way to keep children safe.

"After the fact, there's rarely a treatment option for brain injuries, which we see the most," Borg said. "My 9-year-old can't get in a car and drive, and we all need licenses, so the government has to step in sometimes and take a role in keeping the public healthy."

Some in the ATV industry agree. Carolina Honda doesn't sell ATVs for children younger than 12, despite many families' protests, and manager Jim Wertman thinks the bill is needed.

"These are dangerous machines. A child under 9 is not mature enough to understand what this thing can do," Wertman said. "To a child, driving in a ditch looks fun, but an adult knows it can be deadly."

Gov. Nikki Haley voted in favor of the earlier proposals as a state representative, but her office said she will not weigh in on this bill until it reaches her desk.

Committee Chairman Ronnie Cromer, R-Newberry, expects bill's sponsor Sen. Bradley Hutto, D-Orangeburg, and Grooms to work out the differences by March 16, while Ott said that the House version is still in committee pending the age change to match the Senate's.