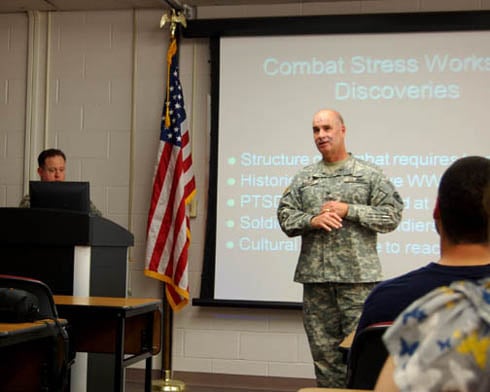 For soldiers, coming home can be a hard transition, partly because of stress, but also because it can be tough to leave the buddy system that characterizes the military, a South Carolina National Guard chaplain said Monday.

"Everything we do in the Army we do as a group," Lt. Col. Steve Shugart told students at USC's journalism school.

The transition between leaving combat and coming home can be a struggle, but especially in the middle of a tour of duty, "that's an individual moment," Shugart said.

Shugart's talk in the Military and the Media course focused on the realities of "combat stress," the truths and myths surrounding the discussion of post-traumatic stress disorder and other forms of behavioral disorders in soldiers.

To help active service members better cope with the dramatic shifts from the combat zone back to their families, the military began having mid-tour breaks, 10 to 15 days when soldiers return home to visit their families.

At a time when military suicides are at their highest in decades, the correlation among PTSD, other behavioral disorders and the transition of a solider back into his or her home life has become a big topic of discussion in both the military and the media.

"There is the impression that everyone who comes back from combat is broken," Shugart said. "But that's not the case."

Only about 11 percent of troops returning from active duty have post-traumatic stress, according to U.S. Army data.

Still, more than half of troops returning from combat report having low morale, and about one in six of returning soldiers screened positive for traumatic stress, depression or anxiety, according to U.S. Army statistics.

For service members returning from active duty, the effects of combat stress or traumatic brain injuries can take six to 10 weeks to show.

Shugart said alcohol abuse and depression occur along with PTSD, but the Army has been putting programs in place to help offset the effects of post-traumatic and combat stress. The Army has put help in the field with soldiers and implemented a three-month reintegration time, so that troops are receiving counseling once a month after service.

For Shugart, talking about military issues like combat stress helps the communication between the military and journalists and helps erase the stigma attached to behavioral disorders.

"I get a chance to speak with some of the folks that I'm going to meet in another place," Shugart said.

Col. Pete Brooks, S.C. National Guard spokesman, said the class is important because it educates future journalists about how the military works and because many of the topics discussed, such as PTSD and sexual abuse in the military, are current discussions in the media.

It's mutually beneficial for those working in public affairs at the S.C. Guard and for future journalists, Brooks said.