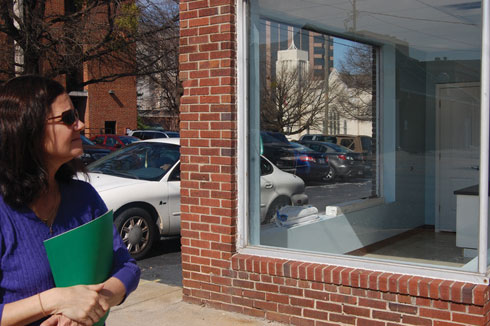 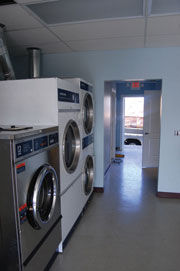 Clean of Heart will have three washers and dryers. Bill Gilbert, president of SLM Commercial Laundry Products in Belton, donated all but one of the units. “I just thought it was our time to chip in and see what we could do to help out,” Gilbert says.

Mary Trivisonno, Catholic Charities of the Midlands’ regional coordinator, says there will still not be enough showers and washing machines for Richland County’s estimated 853 homeless people after Columbia opens a new homeless shelter in May. 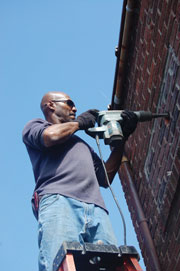 Cecil Middleton drills a hole in the wall for a clothes dryer exhaust at the Clean of Heart laundry and shower facility. Renovation costs for the building were well over the original $20,000 estimate.

Columbia's homeless are about to get some help in the daily challenge of maintaining their hygiene with a free laundry and shower across from the city's bus transit center on Laurel Street.

The facility opens March 7, and for Mary Trivisonno, Catholic Charities of the Midlands' regional coordinator, the squat brick building means the beginning of the end for discarded dirty clothes and makeshift "bird baths" in fountains and bathroom sinks.

Her ministry, which operates out of St. Peter's Catholic Church on Assembly Street, has had a free clothing closet for years, and she says many homeless people end up throwing their donated clothes away rather than finding a way to clean them.

The new facility, Clean of Heart, will initially serve only 30 people a week, but, Trivisonno says, "It's 30 more than right now have access."

The building, on a three-year lease from United Way next door, needed a lot of work when Trivisonno first set foot in it last year. The walls were deteriorating, the ceiling was nasty and the floor was a mess, she says.

Volunteers will man the laundry machines. Bill Gilbert, president of SLM Commercial Laundry Products, donated five of the six machines – worth $30,000 by his estimate.

The facility, which Trivisonno would only say cost "far more than" the original $20,000 estimate Trivisonno used, was funded largely through a specific donation taken up from congregations of nearby Catholic churches.

"I just thought it was our time to chip in and see what we could do to help out," Gilbert says.

But Clean of Heart has had its detractors. Problems with homeless people loitering in the business district have worsened in recent years, says Morris Lyles, a broker at ERA Wilder Realty – just around the corner from Clean of Heart.

"Anywhere you go downtown, you notice it more and more," Lyles says. Homeless people already congregate at the nearby transit center.

Daniel Long, homeless outreach coordinator for City Center Partnership, says the word on the street is largely positive, though some homeless people were frustrated when the building didn't open in January as planned.

"There's a large portion of the homeless community that will benefit from this resource just because they're not eligible for the existing resources," Long says.

A few blocks west, in Finlay Park, Chuck Waters, 52, says news about the facility has already gotten out to the homeless via word of mouth. He has been homeless for six months and says Columbia needs more showers and laundries.

After the city's temporary winter shelter at 191 Calhoun St. closes April 1, "you're not going to have a place to shower unless you use a hose or go to the river," Waters says.

The Oliver Gospel Mission, a men-only shelter at Taylor and Assembly streets, offers beds and showers on the condition that people attend nightly chapel services. And the Mental Illness Recovery Center on Rosewood Drive has showers available for its clients.

But for people unwilling or unable to participate in such programs, cleanliness can be elusive, and, says Waters, "You can't really go and look for a job when you've got dirty clothes on you."

When Clean of Heart opens next week, it will only be open Monday, Wednesday and Friday mornings, and people will have to sign up for a time slot, which Trivisonno says is to keep the facility from becoming another problem area for loitering.

Trivisonno says she's prepared to make changes in the program and may expand to five days a week if things go well.

"We're going into it with an open mind, knowing we're going to make a lot of adjustments," she says.