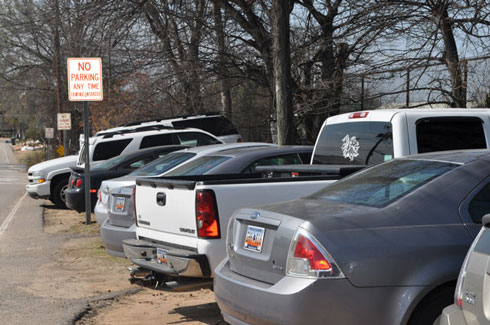 A parking ticket rests under the windshield wiper of an illegally parked car on Devine Street.

The signs that line parts of Devine and Gadsden streets on the western edge of the USC campus are clear – and threatening. "No parking anytime," they warn. "Towing enforced."

The signs are there at the university's request, a Columbia city official says. And the city even replaced smaller signs with larger red-and-white ones over a year ago, at about $80 per sign.

But daily a dozen or more cars are safely tucked away under them. During the day, many belong to students unwilling or unable to park in the school's nearby lots. At night, many belong to customers of a nearby restaurant.

There's no towing or tickets, which combined can cost a scofflaw parker up to $100.

On Monday, one car did have a ticket after the Carolina Reporter asked city officials why it appeared there was no enforcement.

Campus police say they aren't permitted to tow cars or issue tickets in that area.

However, Scott Neal, a senior biology student at USC, says he has parked on the grassy shoulder twice a week for more than 10 hours at a time since January without being towed or ticketed.

Robin Eckert, a bartender at the Thirsty Fellow restaurant across the street, says "people park there all the time."

"Right now I see four cars just from one look out the window," she said.

Restaurant co-owner Terry Davis said she had yet to see a car towed since the restaurant opened in December 2009.

"We don't prefer people to park over there, but I'm sure people do. Probably repeatedly," she said. "My partners said they have never seen anyone towed, either."

Spade said he didn't realize the parking ban was widely ignored, and he did not know how many tickets had been issued in the area.

Asked if he thought the city should be putting up signs then letting them be widely ignored, Major Steve Benjamin responded by e-mail: "This is a prime example of how city services are improved when all of our citizens are more engaged and active in city government. You call and your city staff responds."

Spade says USC wanted the signs for events at the Colonial Life Arena a block away.

"There was a danger of traffic accidents leaving events because people were parking there," Spade said.

USC student Ben Salton says he hasn't seen anyone park along the Devine Street shoulder during those events, and he avoids parking in the area as well.

"During big events when there are a lot of police around, I don't park there because there is a greater chance of being towed," Salton said. "And when they are charging for parking, they don't want you to park there for free."

But Salton, who goes to Thirsty Fellow's trivia night every Wednesday, said he still parks on the shoulder each time and will continue to do so.

"We look at areas where there may be more congestion at specific times," Spade said. "With that said, we might not go there at 3 in the afternoon. We may just give a ticket, but they are still subject to towing."

"I think they probably have bigger fish to fry," she said.