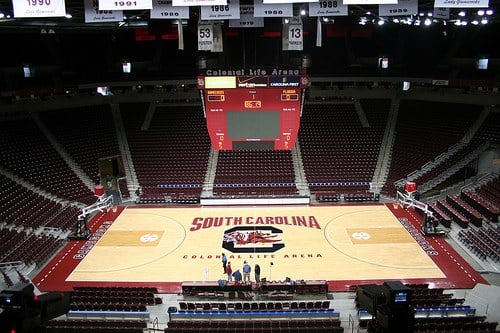 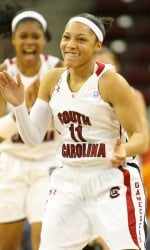 The South Carolina Women's basketball NCAA tournament chances took a hit Sunday with a 74-60 overtime loss to Vanderbilt. The Gamecocks had a 10 point lead in the second half, only to see that lead slip away Vandy came back to tie the game a 58-all and force overtime.

The Lady Gamecocks went cold in the extra period and were outscored 18-4.

"It's disappointing, but it's not over," USC junior La'Keisha Sutton said.

Sutton led the Gamecocks with 20 points on the afternoon but it was not enough as the loss drops the Gamecocks to 16-13, 8-8 in SEC play.

"We still have a chance to play in the SEC tournament. It's going to make us play that much harder to make a statement," said Sutton.

Sunday's game was the last regular season game of the year, and it was Senior Day honoring seniors Jewel May and Valerie Nainima.

The Gamecocks had won seven of the last 10 games, but have now lost the last two games in overtime. The team now will most likely have to win the league tournament to earn the automatic bid to the NCAA tournament.

"I think the more wins we get, the better show we have. We need to come there with fresh minds and get these loses out of our system," USC sophomore Ieasia Walker said.

The SEC women's basketball tournament starts Thursday in Nashville with South Carolina playing Ole Miss at 7:30. The Gamecocks are seeded 5th in the tournament with an 8-8 conference record.