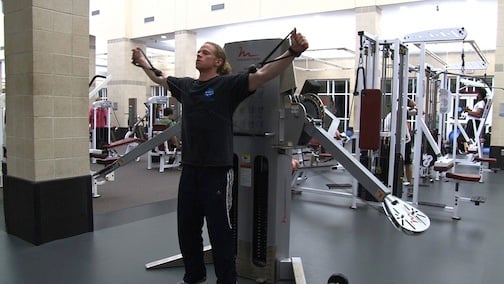 Many Men Are As Worried About Body Image As Women Are

A recent survey by Glamour magazine found women have 13 negative body thoughts a day. But women aren't the only ones with body image concerns.

Danny Weinberg isn't one of them, but he was obsessed at one time.

He entered the Mr. USC bodybuilding contest in 2009 and says he basically lived in the gym. His body was all he thought about.

"I had to think about it every minute of everyday. What am I putting in my body? How good are my workouts? I have to get as big as I can and as lean as I can," says  Weinberg.

USC Psychiatrist Dr. Eric Williams says the book "The Adonis Complex" by psychiatry professor Dr. Harrison Pope which explores the obsession. The book discusses how to identify, treat and prevent body obsessions in men and boys. Pope says in the book this obsession starts at a young age with G. I. Joe dolls. Dr. Williams agrees.

"Think about your action figures. They're these huge people that no one can look like," he says.

Williams says boys believe they need to be muscular to get girls because of images they see in the media.

"Think about magazines like 'Men's Health' and 'Muscle & Fitness.' They have images of these big, bulky guys with their shirts off. They have girls draped over them. Boys get the message, 'If I look like that, then that will happen to me,'" explains Williams.

But Williams says that while men think they need to be huge, women actually prefer a more average looking guy.

"I like a guy who is fit, but not too jacked because then it starts looking gross," says senior Michelle Fantone.

Danny Weinberg says he has done some re-evaluating since the competition.

"It's not what you look like, but it's how you feel. That's ultimately what's most important," says Weinberg.