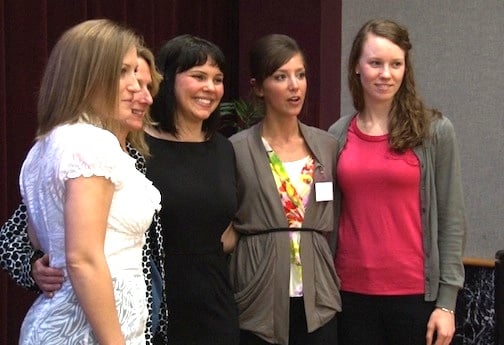 Stacy Nadeau speaks with students after her presentation.

Stacy Nadeau spoke to USC students Tuesday night about the importance of loving your body no matter what your size and shape.

Stacy was one of six women who posed in their underwear on billboards nationwide as a part of Dove's Campaign for Real Beauty.  Her appearance was part of Carolina Beautiful Week, which promotes healthy body image.

Stacy told her story to about 130 USC students, faculty, and staff.

"I grew up in middle school feeling like a I was fat, my thighs were too big, and my hair was too frizzy," says Stacy.

She says she became more comfortable with her body as she got older, but she never saw herself as a model.

A talent agent approached her at work in college and asked her to come to a modeling audition for Dove's new campaign. Stacy says she politely declined, but her roommate sneakily got the woman's card and called her accepting for Stacy.

Stacy went to the audition and several months later, she and five other un-airbrushed women in their underwear covered billboards and magazine ads nationwide.

Now Stacy speaks to thousands of college students a year about the importance of being comfortable in your own skin.

"I talk to students about how we can widen the definition of beauty on our own campuses," she says.

She uses jokes, videos, and personal anecdotes to get her message across to students. Women should strive for the healthy and happy ideal, not the thin ideal that we see in most advertisements, she says.

"All women should just feel good about themselves and they deserve to," says Stacy.

"It's one of the best things that could happen around the campus," says Breonna Mealing, a sophomore at USC.

On Monday, mirrors were covered up around campus. On Thursday, there will be an Eating Disorder Panel Discussion. Throughout the week, you can donate your skinny jeans to fight the pressures of fitting into them. All donations will go to Revente's Last Call in Five Points, which benefits Columbia's women's shelter.