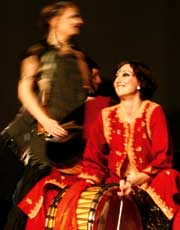 Natalie Brown, front, choreographs belly dance routines for Columbia Alternacirque and takes responsibility for the music, joining in on drums and flute when she’s not dancing. 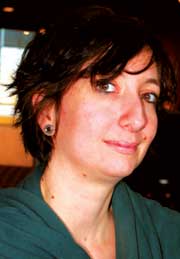 From the Big Easy to the big top

Natalie Brown ripples her stomach. She smoothly snakes her arms around her body. She whips her head around as she whirls dervishes to the energetic whine of an accordion.

Her heavily lined eyes hold an intense gaze. The audience is captivated.

Brown, 30, isn't surprised that her life has literally become a circus. For her, it's a small price to pay to pursue her passion professionally and create unique performance art.

In five years, the director of Delirium Tribal, Columbia's first American Tribal Style belly dance company, and Columbia Alternacirque, an artistic circus troupe, has used her creativity and penchant for taking charge to bring belly dance, fire performance, hula hooping and spoken word poetry from out of the fringes of Columbia's arts scene.

Brown, an Irmo High School graduate, was settled in New Orleans, a Tulane University English degree in hand, writing arts reviews for a weekly newspaper, when a back injury sent her searching for low-impact exercise. She discovered American Tribal Style belly dancing, which combines Egyptian, Turkish, classical Indian, flamenco and North African dance techniques and is typically performed in a group, or tribe.

In 2004, "I walked into my first class and I was hooked," Brown says. "It was like a giant universal puzzle piece of my life falling into place, and that feeling's never left in seven years."

A year later, with Hurricane Katrina in her rearview mirror, Brown moved back to Columbia. She quickly noticed a hole in South Carolina's arts world she couldn't stand – there was no tribal belly dance.

"I got plucked out of a Red Cross shelter by a law firm and worked with them until I couldn't stand it anymore. Then I started my dance company," Brown says. "I was thinking, ‘Life is short and I've got a fresh start, so I'm going to go where my heart tells me right now.'"

Brown dreamed up Delirium Tribal, which began performing monthly at Art Bar in 2006 but had trouble getting enough dancers to consistently commit to shows.

Columbia Alternacirque was soon born of Brown's collaboration with fire performer Steve Oswanski of Fire and Motion. They filled out their regular gigs with a hula hooper recruited from MySpace, and soon the variety shows morphed into scripted, themed shows performed each summer in Art Bar's parking lot on Park Street.

John Tudor, a professional magician of 21 years, has guest-starred in several Columbia Alternacirque shows and says he saw Brown's potential to elevate the performances during one of their first conversations at a costume party.

"She had a fiery enthusiasm and she's fearless. Extremely dedicated," Tudor says. "She's always looking for new ideas and expanded expressiveness, plus there's an incredible circle of people who are drawn to her."

But being taken seriously by the community was another story.

One night a drunk man grabbed Brown's crotch after a performance. She grabbed his throat.

Now, she laughs at the memory of his shocked face and reminds students that American Tribal Style uses fierce "don't mess with me" facial expressions instead of the flirty tone of Turkish belly dancing.

"There's a lot of horrible stuff that turns up in movies about harems and sultans and all that stuff that's not really true," Brown says. "Belly dance was a folk dance that was done by women and men, but mostly women for women, and it's a community folk dance that's really only been on the stage for 100 years."

While Brown transitions Columbia Alternacirque to a touring professional company, she works part time at Cromer's novelty store to pay bills. She estimates the change will take two years.

In addition to belly dancer, director, choreographer, costumer and booking agent, Brown also plays the part of businesswoman. From taking business classes to shopping for "clown insurance," the arts business is always on Brown's mind.

"I knew she wouldn't be happy with a conventional job, and now she's doing the same stuff she did even as a kid," Brown's mother says. "It's impressive building this thing from scratch."

Seven of the 15 or so rotating Columbia Alternacirque performers are interested in taking the show on the road. A one-time $5,000 South Carolina Arts Commission grant that will pay for production and touring equipment is bringing the dream closer to reality.

"It's really gone from grass roots art to a much larger venue," Turner says. "The grant was really a vote of confidence from the city, and we aim to put together a show that will promote Columbia."

Now that the possibility of touring is real, Brown says her life is surreal.

"When you're about to step into a basket to perform an illusion that makes it look like I'm being stabbed with swords at a magic convention in Myrtle Beach, you've got to think, ‘I have the weirdest job,'" Brown says.

She looks back at a childhood of writing plays, making costumes and directing peers for Odyssey of the Mind competitions and says it was fate.

"The fact that I'm running a circus and doing the same exact thing that I used to terrorize my classmates into doing as a kid is not that big a stretch."