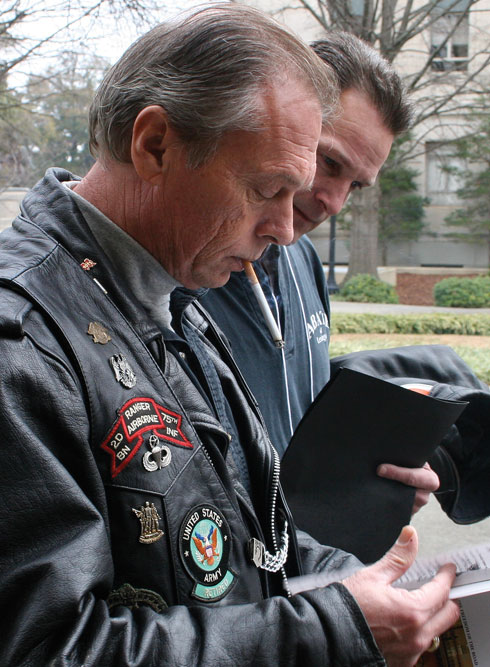 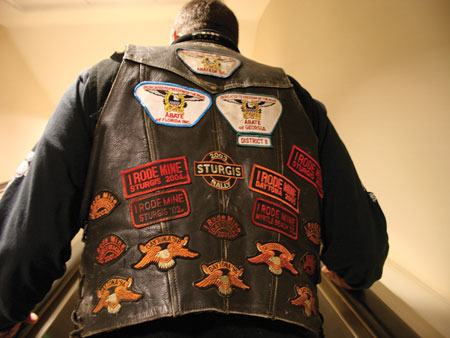 Austin Coates, who has been a lobbyist with Abate for about 15 years, goes into the S.C. State House to lobby his Lexington County representative about legalizing raffles for nonprofit fundraisers.

Gov. Nikki Haley does not ride a motorcycle, but she is a member of Abate.

"Not since I was in college" has she ridden, she told the group of bikers gathered in the State House lobby to greet her. "But this group isn't just about bikers. It's about individual rights."

As a member of A Brotherhood Against Totalitarian Enactments, Haley, who took office in January, represents Abate's rise in influence at the State House.

Members stood nodding under the lobby's high curved ceiling during the Jan. 25 legislative session. Over their T-shirts, most wore leather jackets and vests covered in pins and patches.

State coordinator Scott Gilreath handed out laminated badges printed with the group's eagle logo and "I vote," including one for Haley.

Gilreath has been coordinator for about four years and a member ever since he bought his first motorcycle in Greenville 15 years ago.

But Abate has become more of a general government watchdog than a group focusing on motorcyclists' issues, he and its other leaders say. It has "a few thousand" members in South Carolina, Gilreath said, but wouldn't be more specific.

Some other lobbyists say Abate has gained leverage by causing conflict about issues not important to most legislators, so the lawmakers are willing to vote Abate's way to make the issues go away.

"If the bikers will make a fuss, the legislators don't want to make a fuss," said John Crangle, head of the South Carolina chapter of Common Cause, a citizen lobbying group.

These Abate victories have also gotten news coverage for the distinctive group and its tactics, which Crangle described as an ability to produce crowds at intervals instead of the sustained individual efforts of professional lobbyists.

That's how Abate has gained influence as it expands into lobbying for individual rights, said Randy Page, lobbyist with South Carolinians for Responsible Government, a lobbyist group that focuses on state education spending and favors school choice.

"We are not a bike club. We are a legislative group, and we watch everything the state government is doing," he said.

Horry County has long been a center of conflict over laws aimed at bikers who come by the thousands to the Grand Strand every fall and spring.

Will McCain, a lobbyist for the Grand Strand Business Association, said biker visitors boost the area's economy but tend to drive away other tourists, especially when publicly protesting helmet laws.

Abate's Horry County chapter coordinator, Sonny Rebbaca Rowan, said she moved to South Carolina because she fell in love with Myrtle Beach while she was there during a bike week.

"It was an ironic move because soon after I moved to Myrtle Beach they tried to cancel it," said the Baltimore native who has had her motorcycle license for 16 years. She's been an Abate member for the past 15 years, two of those as chapter coordinator.

To get legislators' attention, Abate members gather in the State House lobby, Panos said, "and then when they break, we go after them."

Abate members, many wearing riding leather, stay visible among the suits in Senate Transportation Committee meetings. Sen. Lawrence Grooms, R-Berkley, committee chairman since 2006, has worked with the group and says individual choices that don't hurt others should not be regulated.

Sen. Paul Campbell Jr., R-Berkley, a committee member for three years, said Abate members know more than anyone how those laws affect lives because the laws apply directly to their lifestyles.

"If they get busted up and don't have health insurance, who's going to pay?" he said.

Abate was founded nationally in 1971 by Easy Rider magazine editor Lou Kimsey and started in South Carolina by Jesse McDugald in 1975. Abate joined the Motorcycle Rights Association that had sprung up to protest national and state laws requiring all motorcyclists to wear helmets.

After years of protests and public hearings, South Carolina amended its law in 1980 so that riders older than 21 will not get a ticket for not wearing a helmet.

Since then, Abate has gained power in the Legislature through people like newly elected Rep. Todd Atwater, R-Lexington, who started working with Abate before he got to the State House when Haley invited him to the group's meetings.

Atwater's not a motorcyclist either, but "their legislative concerns are usually my concerns," he said, citing proposals this year to allow nonprofit organizations to operate raffles as fundraisers.

Atwater wasn't in his office during the Jan. 25 lobbying, but Gilreath left an Abate badge on his doorknob as a calling card, saying, "That way they'll know we were here."