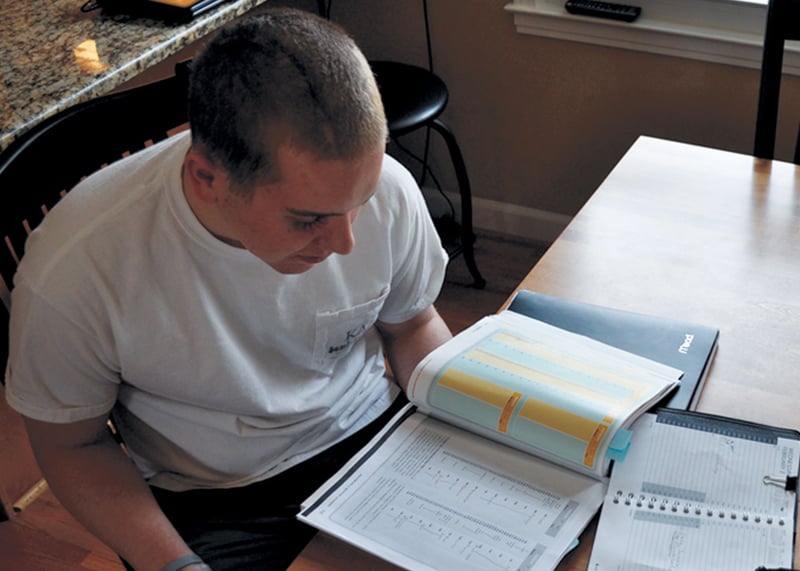 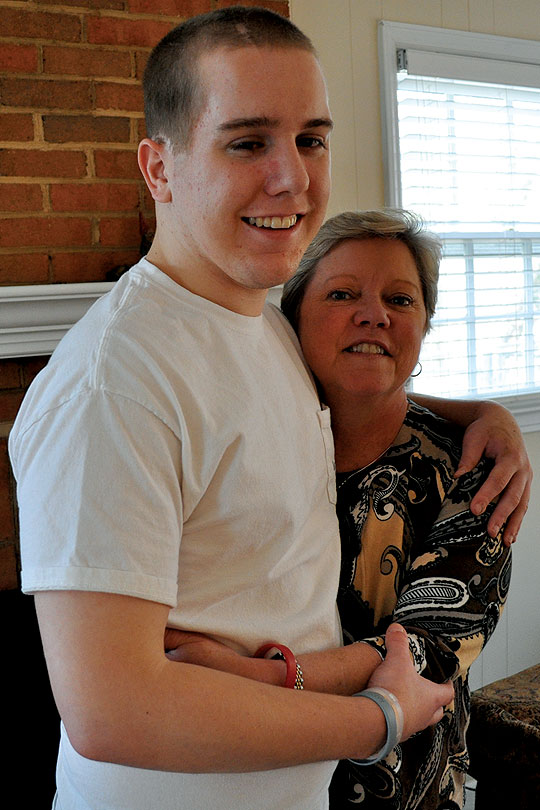 Geralyn Eichorn, Eichorn's mother, says he has become "much more appreciative" since the fall. On Tuesdays and Thursdays, they eat lunch together before she takes him to his study-skills class at Central Piedmont Community College.

The 7-inch scar on the right side of Jimmy Eichorn's head constantly reminds him of the fall from a USC fraternity house window that almost killed him.

But he beat the odds. James "Jimmy" Eichorn did not become one of the 52,000 people the Centers for Disease Control and Prevention says die from traumatic brain injuries each year.

Instead, Eichorn grips the rail as he descends the stairs of his Charlotte home, slowly guiding one foot in front of the other. He is training for a half marathon he plans to run this summer. He relearned how to walk just seven months ago.

He is taking a study-skills class at Central Piedmont Community College, and it's "a lot harder than you'd think," he says in a halting voice. "It's not like USC's University 101."

He plans to finish his political science degree at the University of North Carolina-Charlotte and still hopes to become a district attorney.

Eichorn had been an all-state football player. The life of the party. A ladies' man.

Then, shortly after 3 a.m. on Feb. 23, 2010, he fell out his second-story window at the Sigma Nu fraternity house and landed on a concrete patio.

Today, he sits on a brown leather couch, sunlight shining on his athletic calves, wearing Nike shorts and a Kappa Delta sorority T-shirt. His smile is charming.

"Nobody was with me. I have no recollection at all," Eichorn says. "One moment I was at Elbow Room in Five Points," a popular bar. "And the next moment it was the next day, and I woke up in the hospital."

Former Sigma Nu President Allen Hotchkiss, one of Eichorn's closest friends, says he thought his fraternity brothers were joking when they woke him up in a panic. "I looked out of my window and there he was, on the concrete," Hotchkiss says.

"They can only tell you your son has been involved in an accident," she says. "We prayed the whole way down from our home in Charlotte."

Her son had suffered a traumatic brain injury, destroyed sinus cavities and a damaged optic nerve.

"The doctors in Columbia told us that he wasn't going to live," she says.

Eichorn has seen changes in himself over the past year. "Before the fall, I was a procrastinator. I was nonchalant and ungrateful," he says. "Now, I am appreciative, focused and planned."

Those around him have seen changes too.

"He is more loving toward us now," Eichorn's mother says. She and her son agree their family has become much closer since the accident.

"He is just so humble," Hotchkiss says. "And he is unbelievably positive."

Eichorn was in a coma for three months after the fall.

During Eichorn's initial 10-day stay at Palmetto Health's intensive care unit, a bone flap was removed from his skull to alleviate pressure on his brain, his mother says. He was then transferred to Charlotte's Carolinas Medical Center surgical trauma intensive care unit where doctors reinserted the flap. Afterward, Eichorn suffered from three lung infections.

On April 24, an abscess developed on Eichorn's brain. Doctors reopened his scar, drained the infection and put him on antibiotics for eight weeks.

Toward the end of May, Eichorn was still in a coma. As part of a new procedure in the hospital's rehabilitation center, electrodes on his arms sent vibrations to his brain stem, his mother says. Two weeks later, he woke up.

None of Eichorn's doctors or other health professionals returned phone calls seeking information on how lucky he was to survive and the innovative nature of his treatment.

After intense occupational and physical therapy, Eichorn became an outpatient on June 8. Despite a few seizures and blindness in his right eye he has relearned balance, fine motor skills, speech articulation, and, the hardest in his opinion, coordination.

"I used to be able to catch a ball," the former Charlotte Catholic High School football star says. "During rehab, somebody will throw a ball to me, and my hands get jumbled."

When medical expenses became overwhelming, the Delta chapter of Sigma Nu stepped in with a powder puff tournament that Hotchkiss says raised $12,000 last April, which made a dent in Eichorn's $500,000 bill.

In November, Eichorn was asked to speak at his high school's senior retreat.

"It was very moving," his mother says. "You could've heard a pin drop. He told them he was a miracle and gave them a few pieces of advice. He told the guys to learn how to dance before college so they can dance their way into a girl's heart. All of the girls melted."

"I'm just good like that," Eichorn says with a crooked smirk.

His mother smiles. "His sense of humor is still intact."