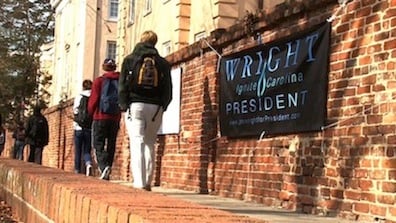 Most students barely noticed the campaign signs that were on Greene St. for over a month.

USC is less than two days away from knowing who will be the next Student Body President.  Last week's general elections have landed Rohail Kazi and Joe Wright into a run-off battle to determine the winner.

But if last week's general election is any indication, the few will be making the decision for the masses.  Last week, only 11-percent of USC-Columbia students voted.  That's 3,200 voters - nearly a thousand less cast votes than last year.

So, why isn't the student body more involved in the election process?  The answers we got from students included:

"I didn't see much campaigning, so I didn't even know when the election was."

Student Government Presidential candidates Joe Wright and Rohail Kazi both have an idea why voter turnout has been so poor.  And, they agree students' participation needs to increase.

"I think the problem is we haven't tooted our own horn," says Kazi. "We have to get people excited and get out and meet people.  Every vote counts."

"They hear about initiatives but have no idea who did them," says Wright.  "You have to let people know their votes count all year...not just during elections."

The run-off elections take place from Tuesday at 9 a.m. to Wednesday at 5 p.m.  Students can vote by logging onto the USC VIP page and go to the  PERSONAL tab.