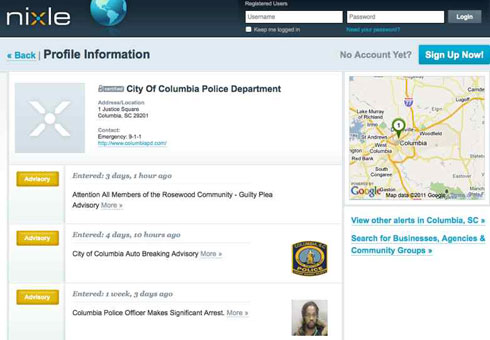 Columbia's police chief wanted the Rosewood community to show support for the sentencing of a man charged in a 2009 shooting at this convenience store.

Police chief's message misses many for whom it was meant

When Columbia Police Chief Randy Scott wanted to get a message to the Rosewood community about a sentencing hearing Tuesday, he used an online alert system. But in the low-income community, many residents had little or no chance of seeing the alert, highlighting the problem with using technological tools like this in some areas.

Harris was arrested and charged with firing a gun at a police officer in the parking lot of the Kangaroo gas station at 3800 Rosewood Drive on June 30, 2009. On Tuesday, according to Scott's message, Harris will plead guilty to assault with intent to kill and point and presenting a firearm.

Calls to Scott were referred to city spokesman Brick Lewis, who said the Police Department strives to keep community members informed in whatever way possible.

"We use every tool in our belt to try to get information to the public," Lewis said. "Nixle is an alert program we've used for a while."

Not everyone in the Rosewood community, like Beanie Jamison, is getting the message.

Jamison remembers hearing about the shooting in 2009, but said he hasn't heard anything about it since then and that he doesn't own a computer, so an online alert system is no help to him.

"If they put that on the computer, I won't get no chance to see it. I just won't get the info," Jamison said.

Nixle's municipal wire service, made available nationwide in 2009, helps cities, towns and emergency agencies exchange information and send out electronic alerts over a cell phone, by e-mail or online. People can go to its website to sign up for alerts.

David McEntire, associate professor of public administration at the University of North Texas, said social media is a great tool, but many are late to adopt it.

"It's allowed many people to increase or maintain communication with others and share information. However, there may be some groups that lack modern computer equipment that may be left out of this phenomenon," said McEntire, who has written about neighborhood communication processes and ways governments can keep in touch.

Ran Wei, a journalism professor at the University of South Carolina who studies mobile communications, said using social media to reach young people makes sense, but that it doesn't make sense for everyone.

"For this community, social media is best used as a supplement to traditional means such as fliers and posters. They will really be more effective than social media in this area," Wei said.

Tami Everhardt has lived in Rosewood since 2006 and said she doesn't receive neighborhood alerts or know anything about Nixle.

"I don't know what it is they're doing now, but if someone presented me with a free alert system, I would use it," Everhardt said.

Gary Rice, president of the Rosewood Neighborhood Watch Association, said the challenge of keeping people informed has been one of his toughest since becoming leader three months ago.

"A lot of Rosewood's residents can't afford the technology it takes to keep up with police alert systems like Nixle," said Rice. "To reach many people, it would take walking door to door."

"I appreciate the police trying to communicate. But I guess you can just call me ‘unreachable,'" Jamison said.