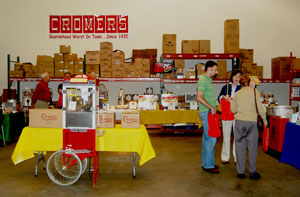 Cromer’s equipment show features traditional and kettle corn popcorn machines. Staff are on hand to demonstrate each machine, and customers can taste the result. 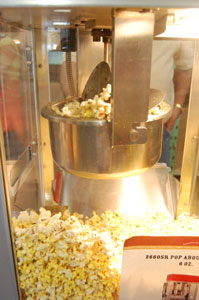 In another sign the economy is getting better, business is picking up even slightly at Cromer's Peanuts, the place that happily describes itself as "guaranteed worst in town."

Carolette Cromer Turner, owner of the snack and novelty shop and the founder's granddaughter, said she thinks customers have "a little bit more money to spend." Instead of customers choosing between boiled or roasted peanuts as they had been doing, in the past few weeks she has seen them buying both.

Cromer's felt the recession "just like any other business," Turner said. She said she has had to cut back employees' schedules to cope with the economy because she'd "like to be in business another 75 years."

Her hope has been buoyed by a 1 percent sales increase from January 2010 to January 2011.

Many customers have remained loyal to the 76-year-old store.

Justin Pace was at the Huger Street store shopping for new equipment for his concession truck. He said he had "been friends with the Cromers since I was a kid."

Steve Davidson, a University of South Carolina graduate from Camden, was buying a Cromer's gift basket to thank a friend. "The improvement in the economy has definitely made it a lot easier to do more local shopping," Davidson said.

Melissa Gonzales, a University of South Carolina senior, has used Cromer's for public relations events in high school and college. "They sell items in bulk, which makes it easier for people to buy stuff at a lower price," she said.

Turner hopes sales from the equipment show, which lasts until Saturday, will add to the small boost in optimism at the store.