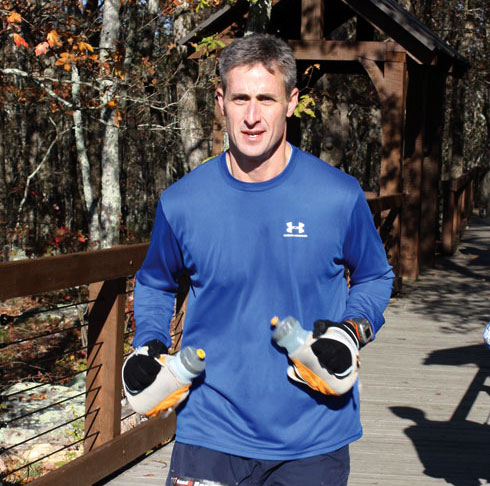 Hartley and his daughter, Brianna, at the Rudolph Rampage Half Marathon in Harbison. Hartley sees races not only as a community event, but also as a family experience.

Dan Hartley loves running - so much so, that for the first time in almost 12 years, he is bringing the first open, individual marathon to Columbia.

And the ultramarathoner is doing it virtually on his own.

"It's my financial risk, my reputation, it's everything on me," said Hartley, race director for the 2012 Columbia Marathon to be held March 10, 2012.

Hartley is working to secure more sponsors for the Boston-qualifying race, but most of the expenses are his own. The money from the 20 to 30 runners already registered, including about three from out of state, has not been spent.

As a self-proclaimed entrepreneur, Hartley has a background in sales and marketing, serves as race director for the Harbison 50k and used to own a golf vacation company that brought visitors into Columbia.

He most recently ran in the Pinhoti 100 in Alabama and plans to race in the Iron Horse 100 in Florida and Palmetto 200 in Columbia this spring. These ultramarathons, races that can cover 50 to 100 miles or more, are a huge influence on Hartley's life and his planning for the Columbia Marathon.

"So much of what I do is about being an ultrarunner," Hartley said. "I don't shy away from a challenge."

The idea of reviving a Columbia marathon sprouted last August. Myrtle Beach and Charleston have marathons, but not Columbia, and Hartley wanted to find out why.

"All of a sudden a light bulb went off and I saw there was definitely a demand for a product - it being the marathon - and just wondering, ‘Why isn't there one here?'" Hartley said. "So I started doing a little research and asking around.

"And no one could give me a reason as to why there is not one."

From there, his idea to start another marathon in Columbia began to grow.

His first step was to team up with the Columbia Regional Sports Council and sales manager Katie Rankin, who gave Hartley access to local politicians and other community leaders. Strictly Running, a running store in Five Points, is also sponsoring the race.

Coming into the project, Hartley knew exactly what kind of event he wanted: a point-to-point marathon, which mimics Boston and some of the ultramarathons he's done before, with spectators, entertainment and a big block party at the end.

The first 500 runners to register will pay $55 to run the 26.2-mile race that starts at Plex Indoor Sports in Irmo and winds through the Ballentine area, over the Lake Murray Dam and then into Lexington and West Columbia before ending in the Vista in downtown Columbia. After May 31, the price will increase by about $5 to $10 every three months until race day.

Unlike most marathons, which loop around a city, Hartley's course covers two counties and multiple towns and cities. This makes organizing police and community involvement more complex. Officials from the Myrtle Beach and Charleston marathons say races like these are generally owned and organized by committees or marathon associations, which use dozens of people to plan the event.

For Hartley, however, this is pretty much a one-man show and a full-time job.

He began mapping out a course in August, and with input from local runners, nailed down a point-to-point course that he considers runner and spectator friendly.

Rick Gibbons, a local runner, is familiar with the course and likes the point-to-point race because it's challenging and runners get to see more of the area.

"It's not a flat course, but that's not always what you look for when doing a marathon," Gibbons said. "You look for a challenge."

Gibbons missed out on running the original Columbia marathon, so next year's race will be his first marathon in Columbia.

"To have something like this come back and get to run a marathon in my hometown is great," Gibbons said.

Ric Luber, president and CEO of the Midlands Authority for Conventions, Sports and Tourism, said the race will benefit Columbia economically.

According to the Myrtle Beach city manager's office, similar races, like the Myrtle Beach Marathon, can pull in up to $14 million from runners spending money at the city's hotels, restaurants and shopping centers.

"Tourism is a billion-dollar industry, and this is one of those events that will bring people from somewhere else," Luber said.

Those people who come here for the race and enjoy the experience will go back as goodwill ambassadors for the area, Luber said.

Nicole Smith, the convention authority's spokeswoman, said its main involvement with the race has been helping Hartley secure hotels.

Hartley wants to make the marathon experience unforgettable, not just during the race, but before the runners get to the starting line and after they cross the finish.

"I want the start line to be a big celebration in itself," Hartley said. "Regardless of who's there, regardless of the weather, I want it to be a celebration of your accomplishment. Because the fact that you're standing there is a tremendous success for you."

Want to run in the race? Here are some gadgets that might be useful.