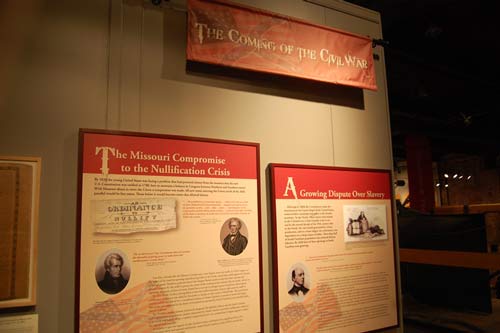 Cindi Lightsey's eighth-grade class is getting ready for the Civil War.

Lightsey said her history class learns about social, economic, and political reasons for the war's beginning. So she and her class took a field trip to the South Carolina State Museum's Civil War exhibit on Tuesday as a transition into its next history unit.

"We've been talking about civil rights, and that's gotten them more interested as we lead into the Civil War and some of the reasons it was fought," Lightsey said as she watched her students wander through the exhibit, which opened this week.

A cannonball from Fort Sumter on loan from a Charleston museum sits next to a copy of South Carolina's Ordinance of Secession. Early versions of the Confederate flag hang above a case of Civil War weapons and a replica of the CSS Hunley submarine. Each has been with the museum since it opened in 1986. John C. Calhoun, Andrew Jackson and Abraham Lincoln also get wall space for their individual roles in the beginning of the war.

As he described the 150-year-old politics surrounding South Carolina's secession, cultural history curator Fritz Hamer said the museum wanted to commemorate that time because "its impact is still felt indirectly" in the difference between how South Carolina natives and nonnatives feel about history.

The exhibit started this week with this first installment of "The Civil War in South Carolina."

He said the museum has gotten a lot of publicity and concern about the exhibit's connection with events like December's Secession Ball in Charleston, held on the 150th anniversary of South Carolina's secession from the Union.

USC history professor Patricia Sullivan said there are better ways to acknowledge this time in the state's history.

"Remember it. Mark it. It's a historic moment – but a ball?" she said.

As a native New Yorker who has lived in South Carolina since 2003 and has studied the South for 30 years, she's drawn to the state's complicated history and its people.

"There were people who have fought to create an inclusive society, and I don't know why more voices aren't heard," Sullivan said.

Lightsey said she tries to teach her class to see all sides of the reasons for South Carolina's secession to help them think for themselves.

Hamer said the museum exhibit isn't designed to celebrate secession but commemorate it and help people understand "this extremely complicated part of our state's history."

The museum will add five more Civil War exhibits between this July and April 2015, each focused on different aspects of the war.