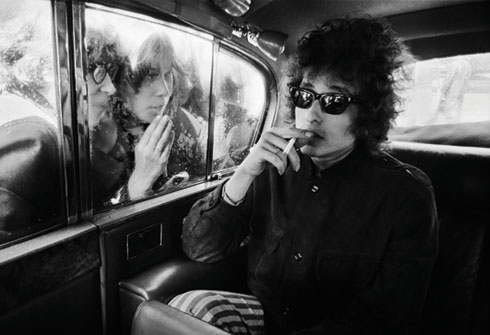 Behind the scenes of rock 'n' roll

A 25-year-old Bob Dylan lounges in the back of a limo, hidden behind sunglasses, taking drags from a cigarette as girls press against the car trying to see inside.

Frank Zappa, his hair pulled into messy pigtails, stares out against a bright yellow background.

Elvis Presley, 21 and at the start of his career, flirts with a young woman backstage before a show in Richmond, Va.

Photographs of rock icons – like Dylan, Zappa and Presley – will cover the walls of the Columbia Museum of Art this spring.

"Who Shot Rock & Roll: A Photographic History, 1955 - Present" will make the last stop on its nationwide tour in Columbia and will run through May 22.

Members of the museum are invited to preview the show Feb. 24. The show will open to the general public beginning Feb. 25.

Events ranging from a hairstyle fashion show to a "Lunch with Elvis" film series are planned in conjunction with the exhibit. Patrick Wall, Free Times music editor, will give a music enthusiast tour March 4 during "Arts & Draughts."

"One of the great things about this exhibition is it's not all professional still portraits or professional live shots," Wall said. "It's small-time guys. It's photographs that caught small human moments."

Wall said the show reminds viewers that the rock icons in the photographs are people, too.

Allison Horne, the museum's public relations manager, said the collaboration between art and music works well and that everyone can relate to the photography in the exhibit.

The exhibition, organized by the Brooklyn Museum of Art and guest curator Gail Buckland, includes 175 works from more than 100 photographers.

The photos will be broken into six categories: behind the scenes, emerging artists, live performances, audiences and fans, portraits and album covers.

Admission to the museum is free Feb. 25 and every Sunday. Tuesday – Saturday admission is $10 for adults, $8 for seniors and military and $5 for students. Children under age 5 are admitted free. The museum is closed Mondays.