Haley to testify on restructuring government 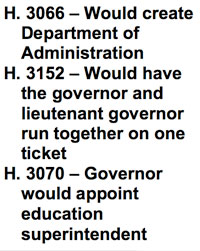 When South Carolina Gov. Nikki Haley steps before the House Constitutional Laws Subcommittee Tuesday afternoon, she is expected to testify in favor of three bills that would dramatically change the structure of the state's government and consolidate her power.

Subcommittee member Rep. Derham Cole, R-Spartanburg, said he anticipated Haley would speak in support of the bills and hopes "that getting these out early in the session will mean favorable passage in the Senate."

The three bills are:

Haley's spokesman, Rob Godfrey, did not return two phone calls. However, in her first State of the State address, Haley said, "We must analyze every agency – Cabinet or otherwise – to see what its core mission is and whether or not the dollars we spend are contributing to that mission."

She also said that by consolidating, the state would save money and better serve South Carolinians.

Sanford, a fellow Republican, tried for much of his eight years in office to get the GOP-controlled Legislature to create a Department of Administration to replace the five-member Budget and Control Board and centralize power with the governor.

However, legislators resisted as their relationship with Sanford grew more antagonistic.

Under H. 3066, the new Department of Administration would overtake the executive agencies that are now part of the State Budget and Control Board as well as parts of the governor's office such as the Office of Economic Opportunity.

The department's director will be appointed by the governor with the input and consent of the entire General Assembly instead of the usual confirmation by the Senate.

Unlike the bill to create a Department of Administration, the legislation consolidating the governor and lieutenant governor to one ticket and making the education superintendent an appointed office require S.C. voters to approve an amendment to the state constitution in 2012.

Haley said the state should have the governor and lieutenant governor on the same ballot, as H. 3152 proposes. "It simply does not make sense to have two people with two different agendas at the top of our executive branch," she said in the State of the State address.

Rep. Greg Delleney, R-Chester, chairman of the Constitutional Laws Subcommittee, expects all three bills to pass to the full Judiciary Committee since the bills also passed the House last year.

The bills were reintroduced this session after dying in the Senate, but Delleney expects the bills to stand a better chance this time.