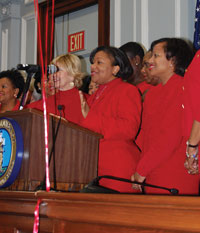 Columbia City Council member Tameika Isaac Devine delivers a short speech before posing for a group photo on the eve of the citywide and statewide Red Dress Day, an event to raise awareness of heart disease risk in women. 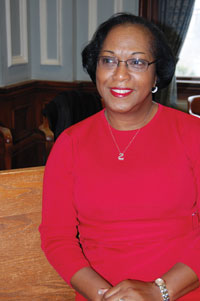 Ruth Ann Oree, 64, says she realized she was at risk for heart disease as she got older. She participates in a fitness program at Antioch Baptist Church in Eau Claire and wear a red dress every year during February, which is American Heart Month.

Ruth Ann Oree wears a red dress because she knows she's at risk for heart disease.

Oree was among the first to arrive at Columbia City Hall on Monday for a group picture with about two dozen other people. City Council member Tameika Isaac Devine had asked women to wear red dresses and men to wear red ties for the photo on the eve of Red Dress Day, a citywide event raising awareness of heart disease risk in women during American Heart Month.

The National Heart, Lung and Blood Institute adopted the red dress as a symbol for women's heart disease in February 2002, when it hosted its first Red Dress Collection Fashion Show.

According to a 2006 study by the American Heart Association, 42 million women had heart disease, compared with 39 million men. It is the No. 1 killer of American women age 20 and over.

Devine said Red Dress Day is also a way to celebrate Black History Month, also in February. According to the same American Heart Association study, 47 percent of black women over age 20 had heart disease, compared with 34 percent of white women.

On Wednesday, at 12:15 p.m. in the State House rotunda, Gov. Nikki Haley will declare a statewide Red Dress Day. Mayor Steve Benjamin will do the same for the city of Columbia.

Latanza Duncan, spokeswoman for the American Heart Association's Columbia office, says heart disease is a "silent killer" because it doesn't cause the drastic changes in physical appearance associated with other diseases like cancer.

Devine said the city has encouraged employees to take the stairs, walk to lunch and eat healthier snacks from vending machines.

Jamie Devine, Tameika Devine's husband and vice chairman of the Richland 1 school board, said schools were serving food with less salt and swapping water for soft drinks in some vending machines.

And Oree, who has worn red in February for the past three years, has been spreading the word to the other women at her church, Antioch Baptist Church in Eau Claire. She is part of a group that goes for regular walks on a trail near the church.

"Exercise was a big part of it, because we get kind of comfortable sitting around the house after we retire," Oree said.

"A lot of us know what we're supposed to be doing, but we need a support group to get going."