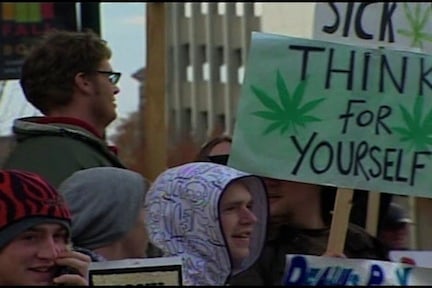 Idaho NORML protestors gathered recently to show their support for legalization of marijuana by lighting up in public.

Proposition 19 that would have legalized the use of marijuana failed in California in last month's election.  Now one group out of Columbia is still pushing to reform marijuana prohibition laws in South Carolina.

"We're focusing on educating the public along with getting the ball rolling on creating legislative change," said Archie.

Californians rejected making pot legal but medicinal marijuana is available in that state. Idaho protestors recently showed their support to legalize marijuana by lighting up in public.  The offense is  a misdemeanor and police turned a blind eye to what was going on at the pro-pot rally.

In South Carolina possession of more than an ounce of marijuana is a felony and is considered trafficking drugs under state law.

"The thought behind decriminalization of marijuana is that if it's no longer a crime, we no longer have to spend all of the law enforcement resources and all of the money and so forth fighting against it," said Hauk.

The only proposal that has been introduced to South Carolina's General Assembly was a bill to legalize medicinal marijuana in 2007.