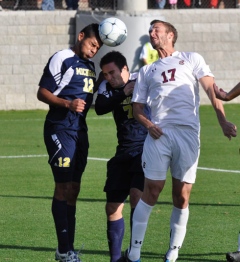 Senior Will Traynor plays tough defense against Michigan on Sunday.

The South Carolina men's soccer team was eliminated from post-season play by Michigan on Sunday.  South Carolina earned a No. 7 seed in the NCAA Tournament after winning the Conference USA Tournament.  The Gamecocks fell 3-1 to No. 10 seed Michigan in the third round of the Tournament to finish the season with a 13-7-2 record.

Michigan scored with 26 minute to play after a scoreless first half.  The Gamecocks had to play a man short after senior Mark Traynor had to leave after getting a red card.

Men's soccer coach Mark Berson says it was a sad day for the seniors, however it's up to the underclassmen to work to get to the tournament next year.

"They've showed us the way, and it's up to the young guys now to pick that up and help us push forward in the future," said Berson.

Many thought Mark Berson was on the downside of his career after 33 season's as USC's only men's soccer coach. USC failed to qualify for the NCAA tournament in the previous four seasons.