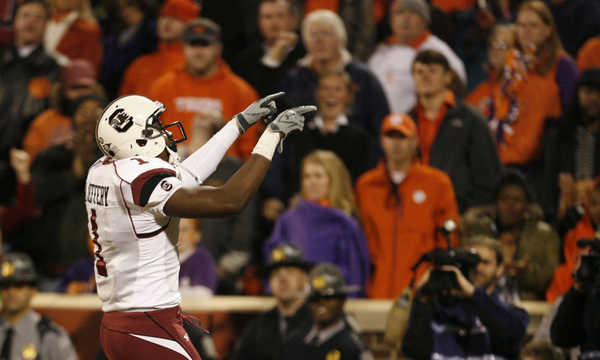 Sophomore wide receiver Alshon Jeffrey motions to the fans just after his touchdown.

The South Carolina football team did something it hadn't done in four decades Saturday.  They beat Clemson two years in a row.  Gamecock football fans haven't seen that since the 1969 and 1970 seasons.

Head coach Steve Spurrier says even with the SEC Championship rematch with Auburn to look forward to, it's always a goal of the team to beat Clemson.

"We were playing for the state championship just like last year,"said Spurrier.  "It's always a huge game to play in-state rivals."

Clemson scored on its opening possession, moving the ball 73 yards in only four plays.  Spencer Lanning countered with a 46-yard field goal and the Gamecocks didn't look back as the Gamecock defense held the Tigers scoreless for the rest of the game.

Star freshman running back Marcus Lattimore was held to only 48 yards on 23 carries but the Gamecock offense found other weapons.  Quarterback Stephen Garcia passed for 227 yards and two touchdowns.  Alshon Jeffrey caught five passes for 141 yards and a touchdown in the 29-7 victory.

The game was huge for the team and for those fans who haven't seen the Gamecocks beat Clemson two years in a row.  Spurrier says the team still needs to focus on practice and not lose sight of Atlanta and unbeaten Auburn in the SEC Championship game Saturday.