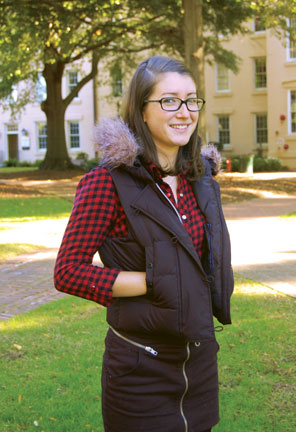 "For me it's a spirituality of ethics," Weeks says. "I try to live by the maxim: to minimize suffering and try and not be complacent in the suffering of any living creatures," she says.

Weeks, 21, says spirituality is something she lives by and is aware of, especially through her studies as an English, biology and environmental studies student.

Weeks was raised a Roman Catholic, but when she was 13, when most young Catholics are confirmed into the church, she decided to take her own way to spirituality. Though she still feels close to Catholicism, it's not something she claims anymore.

"I never felt that the religious aspect of my childhood had any spirituality attached to it," Weeks says. "It was just going through the motions."

Weeks says she enjoys the individual integrity of her spirituality, but also struggles with it.

"I practice it every day as I make conscious decisions as a consumer, as an eater, in what I study and that kind of thing," she says. "But it is hard to know that so many people aren't doing that."

Weeks says it's hard to give advice to those wanting to become more spiritual because it is such a personal matter and something one has to figure out alone for the most part. But she says a good start is to "live with purpose and try to imbue every action of your day with purpose."