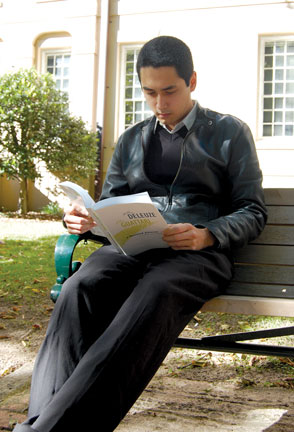 "It's a way for me to kind of stand back and not find myself in the middle of the crossfire," says Yaghy, another 21-year-old USC student.  "Spirituality is something more general and abstract."

Yaghy says spirituality felt right for him to follow. Though his father was raised Muslim and his mother Christian, they didn't practice either religion while he was growing up, but rather pushed him and his siblings to live morally.

He says many religions disappoint him because they lead people to believe the world will be better to them than it actually is.

"I think that we're here on our own and we have the responsibility to treat ourselves with respect," he says.

Yaghy says he sees spirituality as a necessity but knows many people his age who would disagree.

"It's hard to live your life and not have any kind of faith or belief structure," he says. "And it is hard to guess if you're doing the right thing, but for the most part if there is a certain modesty in your approach, you're better off."

Yaghy says he explores and practices his spirituality through his passion for art, and does so as a musicology, philosophy and cultural studies student.

"I look for examples in art where the world shows itself to me," Yaghy says. "Anyone who studies art really has no choice but to devote themselves to it. So it's something that I'm engaged in all the time, and the two just coalesce."