We're Going to the 'Ship - DatelineCarolina 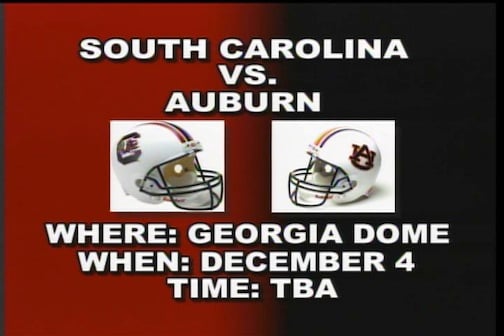 The South Carolina football team's next "biggest game in school history" comes in three weeks. With a historic win over Florida on Saturday, the Gamecocks will go for its first conference title on Dec. 4 in a rematch with Auburn in the Georgia Dome in Atlanta.

Gamecock fans jammed USC's phone lines Monday seeking tickets to the game. But most will have to pay a hefty price to witness school history. With the game already sold out, $80 face value tickets are selling for an average of $450, according to StubHub.

The cheapest tickets were priced at $300 for upper-deck seats in the end zone, while fans needed to pay about $1,200 for seats near the 50-yard line.

USC and Auburn each received 15,900 tickets.

The Athletic department and board of trustees claimed another 2,100 and faculty received 800.

Students were allotted only 1,500 tickets. Students can request tickets on TicketReturn, the same as every game. A lottery began at 12:00 a.m. Tuesday and will last until 11:59 tonight.

Students selected in the lottery will pick up a receipt Thursday and Friday from the Colonial Life Arena box office. That receipt will be traded at the actual gate for a ticket to ensure students don't buy and scalp tickets. The tickets will cost $55 for students selected.

The more points you have in the TicketReturn lottery, the more likely you are to receive a ticket. Points come from attendance, early arrival and seniority.