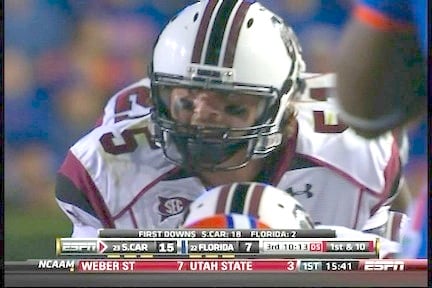 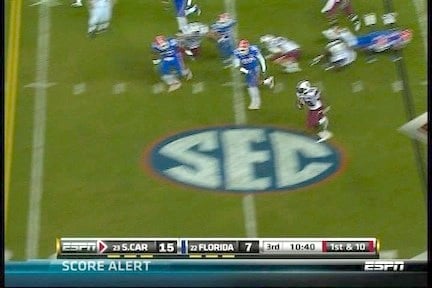 Running back Marcus Lattimore breaks away from Florida defenders.

South Carolina's football team has not gotten close to any SEC title in the 19 years it's been part of the conference.  Many Gamecock fans thought it would never happen, especially in Ben Hill Griffin Stadium in Gainesville where USC had never won.  But, as head football coach Steve Spurrier was being carried off the field, and the game clock hit zeros Saturday, the title that fans longed for was finally a reality Saturday night.

The game started off with a bang as Florida's Andre Debose returned the kickoff 99 yards for a touchdown just 14 seconds into the game. South Carolina answered quickly scoring on its first drive, a 49-yard Spencer Lanning field goal.

South Carolina took control of the game from then on, dominating the rest of the first half.  USC went on to score on three of the last five possessions and had a 15-7 lead into halftime.

Saturday was the first time since the Alabama game in which the offensive and defensive sides of the ball both played well.  Florida's three-quarterback offense was held to only seven points as USC rolled to a 36-14 win.

Marcus Lattimore rushed for a total of 212 yards on 40 carries and three touchdowns.  Quarterback Stephen Garcia added 156 yards through the air.

The Gamecocks secured a spot in the SEC championship game Dec. 4 in Atlanta against the SEC West champion Auburn Tigers.