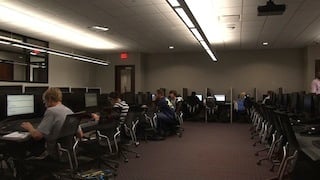 Student athletes in study hall at the Dodie athletic center.

The National Collegiate Athletic Association says its latest figures show more college football players are graduating on time than ever before.  The figures for 2003, the latest available, show 69 percent of players nationwide got diplomas.  But that wasn't the case for some of college football's top tier programs, including South Carolina.

USC's football team is struggling in the classroom. USC reports it graduated 57 percent of its senior players, below the national average. USC players say they believe the reason the graduation rate is so low is because the school sends players to the NFL before they get their degrees, like most top tier football programs.

The USC freshman class that graduated this past May had 24 athletes in it and only five of those athletes went to the NFL. That means they should have had a graduation rate of about 80 percent. So why are they still graduating at such a low rate?

"It's different reasons." Hickman said. "I mean, you can't make people want to do well."

"Sometimes they always have that dream of making it to the next level and it's hard to convince football players there is more to life than just football," said the football academic advisor Maria Hickman.

Hickman says she doesn't understand how they don't succeed when they have every resource to do so at their fingertips.

"They have tutors, they have mentors, and we hand out calculators, if they need a laptop on the road. Basically anything you need they have it here," Hickman said.

So why is the football team's graduation rate barely over half when athletes here at USC have every opportunity to succeed?

While the Gamecocks are excelling on the field and competing for that top bowl game, Hickman says many on USC's players have not taken advantage of the resources they have to find the same success in the classroom.