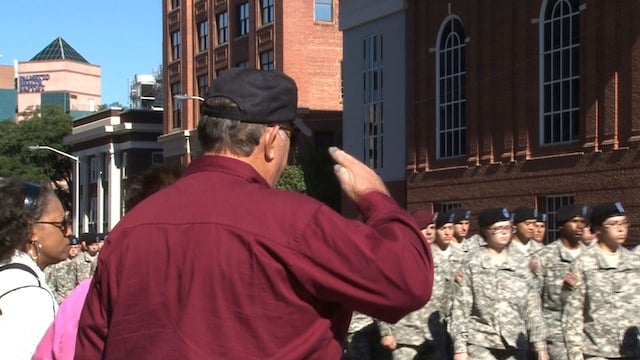 Vietnam veteran Joseph Kirkland salutes army members as they walk past him in the Veteran's Day parade.

Most war veterans return home as heroes. But for many Vietnam veterans, this was not the case.

Joseph Kirkland is a retired soldier who attends the Veteran's Day parade each year. He is proud to be a Vietnam veteran, even though it is seen as one of the most unpopular wars in U.S. history.

"When we came back there were very negative people spitting on soldiers," Kirkland remembers. "I just prayed to God that no one would spit on me."

Kirkland still carries a part of the war with him everywhere he goes.

"I still have a bullet today in my right arm from that action," Kirkland says.

He says the parade is not about him, it's about the people who died while serving their country.

"To me this is all about the ones that didn't make it that we are honoring him," Kirkland says.

He says he has no regrets about serving in Vietnam, even though people may have disagreed with what he was doing. He says he was there because he felt it was his duty.

"I was there because my country asked me to be there," Kirkland says. "That's what I had to do."