Students Speak Out Against Carolina Productions 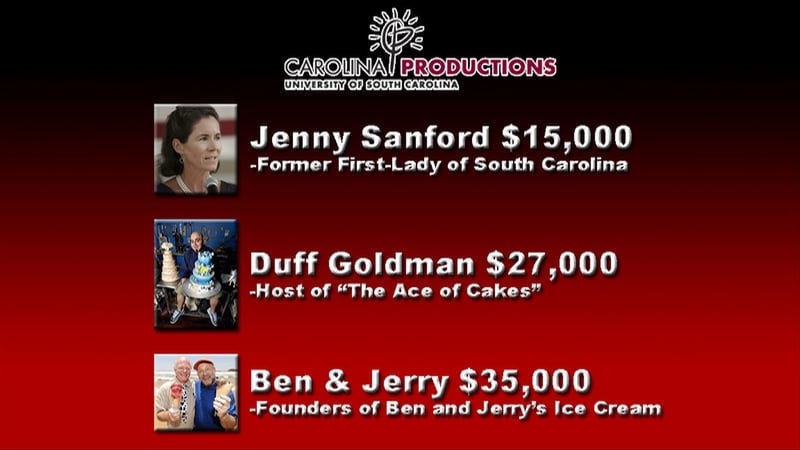 Ben and Jerry ice cream makers received $37,000 from Carolina Productions for making an appearance. Jenny Sanford and Duff Goldman from Ace of Cakes followed closely behind.

Carolina Productions is being criticized for paying Jenny Sanford $15,000 to come speak for forty-five minutes to a crowd of less than 200 students.  In the latest issue of the Daily Gamecock newspaper Carolina Productions was reported receiving $500,000 in university funding.  Now, students say they aren't very happy with how their money is being spent.

"For Jenny Sanford to come speak, then only about 100 students to go see her, it's probably not a good thing to be spending the money," said USC student James Hoult.  "Especially when there are students who need it for their education, which is what we're here for in the first place."

Carolina Productions is a student based organization funded by student activity fees.  Jenny Sanford's cost for appearance dwindles in comparison to some other visitors.  Ace of Cakes star Duff Goldman received $27,000 and the founders of Ben and Jerry's ice cream received $37,000 for making an appearance.  Sarah Morgan, the Program Advisor, declined in commenting about the organization's spending.  However, Dominique Grate, a member of the Student Government Advisory Board, said he is in support of Carolina Productions.

"Carolina Productions receives money from student activity fees," said Grate.  "People may be frustrated that this is not going to what they would like to see.  Many students who are complaining, we find time and time again, they're not involved in the process."

Overall, students say they think they should have more say in who speaks and how much they're paid.  Students say they would rather the university be more up front with where the money is going or at least offer a vote instead of taking action without a consensus.

The Student Government said that if students are really concerned with how money is being spent then they can join the Student Advisory Board to give their input.