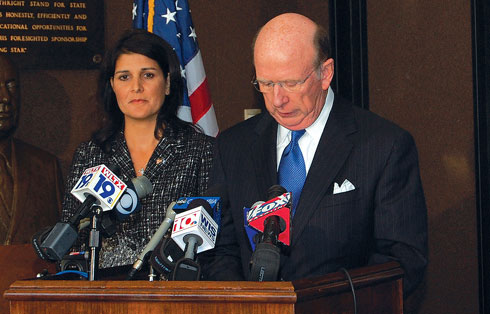 Wilkins will help Haley fill the 17 Cabinet positions at state agencies, including the Commerce, Corrections and Social Services departments. Haley said she has already received hundreds of resumes and has yet to decide who will keep their positions and who will be replaced.

Haley said agencies will face difficult times, but she promised that agency directors will "understand what it's like to be on the other side of the red tape."

"You will see us work to find the most aggressive team, the most creative team and the most talented team that we can put together," she said.

Haley said she chose Wilkins because of his work with five governors' transitions into office.

The months preceding Jan. 12, when Haley will take office as South Carolina's 116th governor, will be used to set a clear and successful course for the Haley administration, Wilkins said.

"I know there is a lot of work to be done between now and Inauguration Day," Wilkins said.

Haley defeated Democratic candidate Vincent Sheheen in last week's election to become the first woman in the state's history to be elected governor, as well as the nation's youngest governor.

Constant communication with state legislators will be important going forward, said Wilkins, who spent 25 years in the House, including 11 as speaker, before President George W. Bush appointed him U.S. ambassador to Canada.

During Haley's campaign, critics compared her to current Republican Gov. Mark Sanford, who has battled with state Legislature during his time in office. In South Carolina, the governor has limited power, and Haley has said one of the things she seeks is more ability to oversee state government.

The transition team "will work very hard to establish a foundation of strength, in which Nikki Haley can confidently begin her work," Wilkins said.

They will help the future governor tackle the problems she's set to inherit, including a projected $1 billion general fund budget shortfall and an 11 percent unemployment rate.

"Yes, this will be a challenging time," Haley said, "but in every challenge there is a great opportunity."