The view from the Green Party's party: Laid back and low expectations 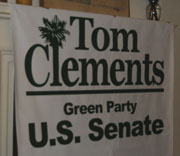 Clements supporters gathered in the living room to watch election results through the night. 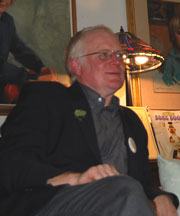 The view from the Green Party's party: Laid back and low expectations

While they were in cavernous meeting rooms, Clements and his supporters gathered in the living room of Francis Close's home in Columbia, a campaign banner hung on one wall.

Some of the 20 supporters crowded around the television to watch the results, occasionally letting out applause or jeers as state and national returns came in.

Others just chatted with friends over hors d'oeuvres. It was a bustling area as they talked about the incoming election results and caught up with old friends.

Not even the announcement moments after the polls closed that  incumbent Republican Sen. Jim DeMint had won dampened the spirits. The mood was light, with many cracking jokes and enjoying the food and drink.

Clements spent the early evening fielding phone calls, walking back to a computer with his campaign manager to check results and spending time with his supporters. Before long, he settled in front of the television and watched the results with everyone else.

When it was announced that Clements had received 7 percent of the vote, the room was filled with claps, whoops and cheers.

Return to all our election coverage.