Miss S.C. pageant looks to revamp its image with move to Columbi - DatelineCarolina

Miss S.C. pageant looks to revamp its image with move to Columbia 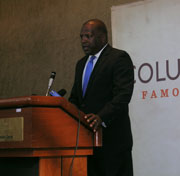 Columbia mayor Steve Benjamin said that the pageant moving to Columbia was a big step in the revitalization of the city. 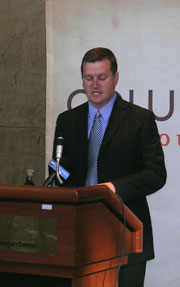 New executive director of the Miss S.C. Scholarship Organization Ashley Byrd wants to restore prominence to the pageant by getting it back on television, and by utilizing a webcast. 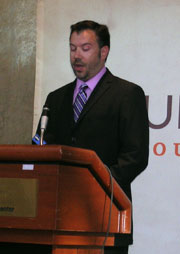 The next Miss South Carolina and Miss Teen South Carolina will not be crowned in Spartanburg, but in Columbia, in what organizers said Monday would be a "revitalization effort" for the pageant and the capital city.

Ashley Byrd, executive director of the Miss South Carolina Scholarship Organization, said the pageant is looking to develop a webcast, and hopefully get back on television.

Byrd was named director on Oct. 8 by the Miss America Organization after former director Joe Sanders retired in July amid controversy where a judge accused Sanders of attempting to influence judging. Sanders denied the allegations.

Columbia Mayor Steve Benjamin called the move a step forward in the revitalization of Columbia.

"We turned on a dime. We had a very short window which we had to make sure the Midlands and city were competitive in trying to attract the pageant," Benjamin said.

Columbia won out over Spartanburg and Greenville, among other cities that bid.

"We worked with quite a few cities, but the way Columbia pulled together and showed their passion, it matched our passion in revitalizing this pageant," Frocchi said.

Columbia's central location was key in the decision.

"What we want is an area where people can have a daytrip, where they can come up, support someone on stage and then make it back home for work the next day," he said.

Benjamin also said the move will give the organization some marketing dollars and free up some of the pageant's expenses.

Benjamin is predicting that the pageant will bring in around $1 million, surpassing its predicted $630,000, according to the Midlands Authority.

Ric Luber, president of the Columbia Metropolitan Convention and Visitor's Bureau, said the University of South Carolina also played a role in selling Columbia to pageant organizers because.

The university offered a place where all the participants could be housed in one location with the many dorms on the campus to pick from, he said.

Luber said he had been to other states where events such as this were in the capital, and he thought an event like this should be in Columbia.

"This is for the recognition of the state capital," he said. "People have accessibility to come here with easy traveling. All the amenities here make it a great time for the families coming in."

Township executive director Sally Roach said the 3,122-seat auditorium's size and availability played a role in getting the event over venues such as the Colisuem and Colonial Life Arena.

"We could bring in some different events, giving some economic stimulus to the area. Everything just came together nicely," she said. "We were the perfect fit."