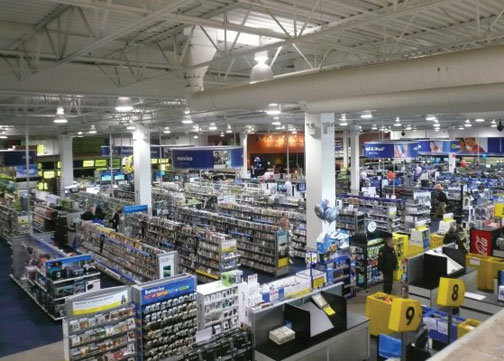 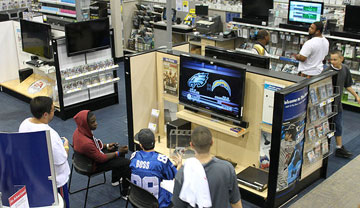 Best Buy customers try out what they want for Christmas while shopping on Black Friday.

Black Friday, the massive shopping day known for its day-after-Thanksgiving deals, is happening sooner than you think at some stores. Sooner, being this Friday.

Stores like Sears and Best Buy are having Black Friday-type deals a month early in hopes of making customers happy and jump-starting the holiday season. The National Retail Federation projects a 2.3 percent increase in holiday sales to $447.1 billion this year.

Best Buy sales associate Dora Mayer has worked four Black Fridays and says that despite the economy she expects crowds this holiday season to be as large as other years, if not larger.

"Electronics as gifts just get more popular every year," Mayer said. "I'm always shocked to see how many people come out to save a few dollars in exchange for missing Thanksgiving."

Mayer says last year Best Buy opened its doors at 4 a.m. on Black Friday but had people lining up more than a day in advance.

"Even though there are some good deals this weekend, I think people are always going to be afraid that a better deal will come along. So I'm not expecting a Black Friday-type traffic."

Natalie Norris-Howser, a Sears spokeswoman, says Sears is promoting a "Black Friday Now" sale in response to customers' request for an extra day of deals.

Among the featured specials are Kenmore appliances up to half off and half off outerwear and other clothing.

She says Sears also expanded its layaway policy to 12 weeks instead of eight to better accommodate shoppers' wants.

The deals don't stop when this weekend ends. Lowe's is offering 90 percent off coupons to thousands of its Facebook followers November 5-7.

But for some shoppers it's still a little too early. Chelsea Jones who does some of her holiday shopping on Black Friday says this weekend won't make a difference for her.

"I just don't have the money right now, so this isn't going to get me to go shopping," said Jones.

Brad Wilson, editor-in-chief of BradsDeals.com and a retail analyst who has appeared on shows like "Oprah" and NBC's "Today," says whether shoppers show up doesn't matter, because participating retailers have already won.

Black Friday got its name as the day that many retailers finally knew they would turn profit for the year. Mayer and Wilson both agree that a big part of what makes Black Friday so successful is its social aspect.

Wilson says that an early Black Friday isn't going to bring in the same crowds, but sales should definitely be up from last year's last weekend of October.

He says shoppers this weekend are looking for a deal better than what they've seen in the past.

"Pain is persistent. I think that people are going to be even stingier and more frugal than they were in 2008 or 2009," he said. "I think that if a deal really is good consumers will jump at it, but it has to be really good for them to do that."