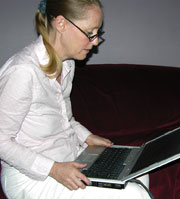 Lora Collins agrees with the Libertarian view of being fiscally conservative, but socially liberal. "My opinion shouldn't infringe on someone else's agency," she says.

This year's election would appear to give Libertarians, South Carolina's perennial third party, the best chance of breaking through to victory.

With a dozen candidates on the ballot – one running again for state education superintendent, three for the U.S. House and the rest for the S.C. House – and a pool of disgruntled voters, the party hopes to do more than play spoiler; it has high expectations to capture at least some state House seats.

But S.C. Republicans combined forces with the tea party movement in February to try to capture more of those disaffected voters and hold off any upsets, and many of the political scientists who follow S.C. campaigns don't expect the Libertarians to be able to capitalize.

"Tea partiers, in a lot of states, decided to go the third party route, but then entered the Republican establishment," said Neal Thigpen, a retired Francis Marion University political science professor who is affiliated with the GOP.

But this probably won't make too much of a difference, because the tea party movement was supporting candidates already most likely to win in South Carolina, said Robert Oldendick, a University of South Carolina political science professor.

Still, the head of South Carolina's Libertarians thinks his party retains a good chance of picking up more votes.

"Democrats are so far to the left, and Republicans are so far to the right. We're in the middle; they find our philosophy and our basis are as close as they are going to get," said Michael Carmany, chairman of South Carolina's Libertarian Party.

There are more Libertarian candidates because both Republicans and Democrats are letting the people down, said Carmany, who is running for the third time in six years for the District 8 state House seat in Anderson and Oconee counties. He pulled 25 percent of the votes when he last ran in 2006 against Republican Don Bowen.

Even with no other candidates in the race, Carmany said this was a significant percentage because Libertarians typically receive 5 percent or less.

Historically, the Libertarian Party, founded in 1971 in Colorado, was considered anarchist, Carmany said. Libertarians are fiscally conservative, but socially liberal.

Wes Benedict, executive director of the national Libertarian Party, said the party believes the IRS and property taxes are unconstitutional, but it supports the legalization of marijuana and wants to loosen immigration laws.

Lora Collins from Cayce said she doesn't really believe in parties because people "should run on character, not party," but said she considers herself a Libertarian because she agrees with its philosophy more than any other party's.

Collins, who was a Constitutionalist before her 22-year-old son talked her into being a Libertarian three years ago, said the only job for the government "is to protect life, liberty and property."

"Beyond that is too much," she said.

Collins considers herself to be very conservative, but doesn't think her values should determine someone else's rights.

Libertarians are the most likely spoilers because theirs is the oldest active third party in South Carolina. But even in the 2006 state education superintendent race, which political observers call the closest in South Carolina history, some political scientists say the razor-thin winning margin by Democrat Jim Rex had nothing to do with third parties, though Libertarian Tim Moultrie did receive 19,000 votes. Rex beat Republican Karen Floyd by 455 votes out of more than 1 million.

Moultrie, who has run for five offices in the past 21 years, is running again this year for education superintendent against Republican Mick Zais and Democrat Frank Holleman.

"We can't control the race. We can only focus on our own campaign," said Jay Ragley, Zais' campaign manager. Even though Moultrie may pull from the Republican vote, Ragley said, Green Party candidate Doretha A. Bull will probably pull from the Democratic vote and offset any possible spoiler effect.

Thigpen, who sat on the South Carolina Election Commission for 16 years, said he doubts a third party has played a major role in any South Carolina election.

"But the problem is that voters often feel they're wasting a vote, even if they're sympathetic to them, because they're probably not going to win," Woodward said.

He said there hasn't been a new major party since the Republican Party was founded in 1854.

Three Libertarians currently hold elected office in the state. William "Bill" Woolsey was elected James Island mayor in August, and his wife, Kathy Price Woolsey, has been elected the Charleston County soil and water district supervisor three times since 1998 and is running again this year. Tom Arant became chairman of the Calhoun County School Board in 2006.

As for the rest of the races, Carmany agrees the Republicans' tea party ties may weaken the Libertarians this year, since both are going after disaffected voters.

"But we'll gain more support in 2012 when nothing changes," he said.