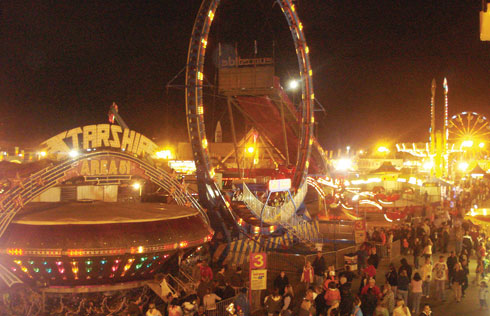 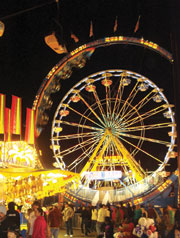 Nearly half a million people showed up for the fair as pleasant weather prevailed.

Fried butter, Tilt-a-Whirl and Darius Rucker helped bring nearly half a million people to the South Carolina State Fair this year, up 20 percent from last year.

The overall turnout was the largest number they've seen in five years, general manager Gary Goodman said. "It was a great run in that perspective and in all perspectives."

Goodman credited the dry, sunny weather and temperatures in the mid 70s to the high 80s for the big turnout.

"People just wanted to get out and enjoy themselves," Goodman said.

He expects the revenue from the 12-day event will reflect that as the numbers come in over the next three days.

Though the $10 base price admission did not change, revisions were made to the admissions policy allowing for discounts to senior citizens and The Boy Scouts, who are celebrating their 100th anniversary in the United States. Among the opportunities were free food coupons included with tickets bought in advance and free admission for those attending between noon-2 p.m. on weekdays.

Free admission was given to members of the military and their families, and Courtney Van Tress said she, her husband, who is in the military, and their three kids took advantage of it.

"We were impressed to see so many rides," said Van Tress. "The kids really enjoyed the Ferris wheel and Sky Glider."

She said that they been to a few other fairs in Oregon before moving here in June, but this was the biggest they had ever attended.

"They have all the fair food you could imagine. Really enjoyed the hot dogs and Italian beef," she said. "We were thrown off by the odd food like the doughnut burger, but we're not from the South."

Though not all concerts were sold out, headliners like Corey Smith, The Avett Brothers, Miranda Lambert and Darius Rucker, who has started a solo career after being lead singer of Hootie & The Blowfish, brought in a large crowd.

Walt Gerald said he and his friends went just for the Avett Brothers concert but enjoyed the rest of the fair too.

"I've seen them in concert before, but it was definitely nice to see them in that kind of setting right off campus, with the fair all around us," he said.

Goodman said Monday's rainy weather didn't slow fair workers as about 75 percent of the rides were already on the road heading to the Coastal Carolina Fair near Charleston. He said the fairgrounds should be cleared out and back to the normal by Wednesday.